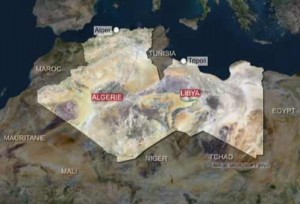 The newly formed Libyan government has ordered the temporary closure of the country’s borders with four of its neighbors and declared the southern region a restricted military zone.
The land borders with Chad, Niger, Sudan and Algeria were shut in a bid to better control and fight “illegal immigration and illicit activities such as arms & drugs trafficking”, the Libyan state media said. But experts insist that the move is part of the underway international community preparations for military action in Mali against Al-Qaeda-linked rebels, who have seized much of the north of the country.
According to some analysts, military intervention in Mali would certainly push terrorist groups to neighbouring countries which have lately tightened their borders security. Mali’s neighbours have also beefed up borders patrolling and promised to take the appropriate measures to defend their borders and territorial sovereignty. They vowed to coordinate actions to disrupt and prevent terrorists and arms smugglers from operating freely in the vast Sahara desert region, threatening the Sahel and the global security.
Many countries of the region have intercepted weapons en route to Mali wherein radical Islamists have the upper hand. The seized weapons include AK-47 assault rifles, machine guns, utility vehicles, grad rockets and anti-aircraft ammunition.
West Africa regional group (ECOWAS) has adopted lately a plan to send 3,300 troops to end Islamist control of northern Mali. The military intervention plan devised by the Economic Community of West African States (ECOWAS) is in line with UN Security Council Resolution 2071. Founded in 1975, the African regional bloc, mustering 16 West African countries, seeks to promote economic integration in all fields (economy, industry, transport, telecommunications, energy, agriculture, natural resources, commerce, monetary and financial questions, social and cultural matters…)

Newer PostEberhard Rhein: “I would rather be happy to see Algeria and Morocco normalize their trade relations.”
Older PostTunisia: Super High Network Services