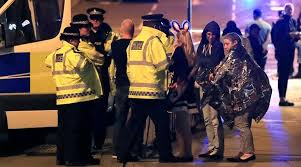 King Mohammed VI has condemned the Manchester terror attack as a despicable act that targeted several innocent victims and reaffirmed Morocco’s full support for international efforts to confront the phenomenon of terrorism and to dry up its sources.
In a message of condolences to the British Prime Minister Theresa May, King Mohammed VI expressed great grief and deep indignation at the odious terror attack.
The Monarch expressed, in his personal name and on behalf of the Moroccan people, “firm condemnation of this abject criminal act” and “strong solidarity with the British people in the face of these barbaric acts that are “condemned by all religions and human values”.
“I reaffirm the full support of the Kingdom of Morocco for the efforts of the international community to confront the phenomenon of terrorism and to dry up its sources,” he added in his condolences message, relayed by MAP news agency.
The King extended to the Prime Minister Theresa May, to the families of the victims and to the entire British people, “deepest condolences and sincere feelings of sympathy, imploring God to accept the victims in His vast Paradise and to grant full recovery to the injured.”
At least 22 people, including children, have been killed in the suicide bombing Monday night at Manchester Arena, one of the largest music venues in Europe, and some 60 others were injured.
The Islamic State group reportedly claimed responsibility for the attack that came less than three weeks before Britain’s general election on June 8.