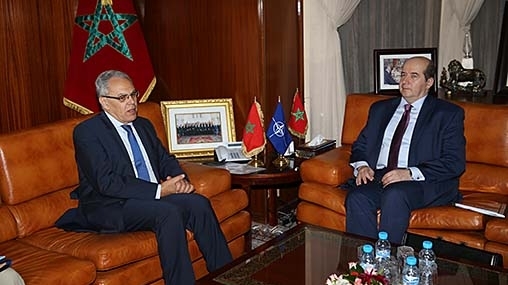 Cooperation in the field of countering cyber security risks has been at the heart of talks in Rabat between Morocco’s Minister Delegate in charge of the Administration of National Defense Abdeltif Loudiyi and Assistant to NATO’s Secretary General in charge of emerging risks Sorin Ducaru.

The two officials examined future cooperation prospects in the field of cyber security, notably through the exchange of expertise and training, the Administration of National Defense said in a statement.

Beside cyber security as an emerging threat, the two parties discussed the multiple facets of cooperation between NATO and Morocco, both at the bilateral level and as part of the Mediterranean dialogue, the statement said.

The talks were also an opportunity to highlight the headway made in cooperation between the two parties in various fields relating to defense.

Morocco has been a member of NATO’s Mediterranean dialogue since 1994 and has the status of associate with NATO’s Parliamentary assembly.

In March 2016, NATO incorporated the Royal Moroccan Armed Forces into its Interoperability Platform, which aims at strengthening the defense and security sectors of partners in the Middle East and North Africa.