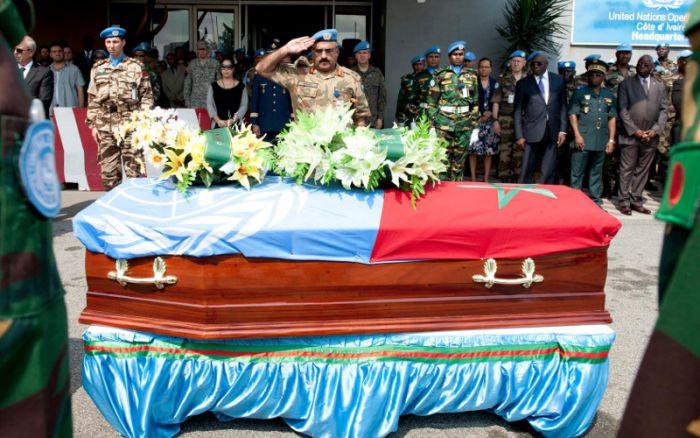 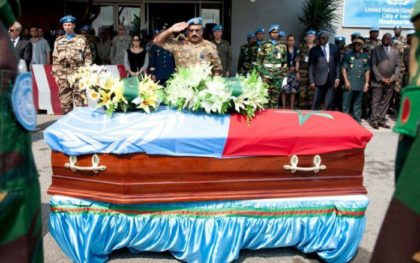 The United Nations Multidimensional Integrated Stabilization Mission in the Central African Republic (MINUSCA) has confirmed the death of the Moroccan peacekeeper previously reported as missing following an ambush by the Anti-Balaka rebels on May 8, 2017 in southeastern CAR.

The MINUSCA retrieved the fallen soldier’s body and transferred it to the Royal Armed Forces stationed in Bangui.

The attack on the MINUSCA convoy left a total of five peacekeepers dead, 4 Cambodians and 1 Moroccan, following a firefight between them and the anti-Balaka rebels. Ten peacekeepers were injured in the attack, 9 Moroccans and 1 Cambodian.

The UN Secretary General, Antonio Gueterres, the MINUSCA and the UN Security Council have all strongly condemned the attack against the peacekeepers, saying that such an aggression amounts to “war crime.” They also extended condolences to the families of the victims and expressed solidarity with Morocco and Cambodia.

In this regards, they called on authorities of Central African Republic to bring the perpetrators of this heinous attack before justice.

The President of the UN General Assembly Peter Thomson arrived in CAR and showed solidarity with the MINUSCA peacekeepers in a hospital in Bangui.

The MINUSCA will hold a memorial ceremony for its fallen members. The ceremony will be presided over by UN Under-Secretary-General for Peacekeeping Operations Jean-Pierre Lacroix in the presence of the highest Central African authorities.

Clashes between the mainly Muslim Séléka rebel coalition and anti-Balaka militia, which are mostly Christian, plunged the country of 4.5 million people into civil conflict in 2013.