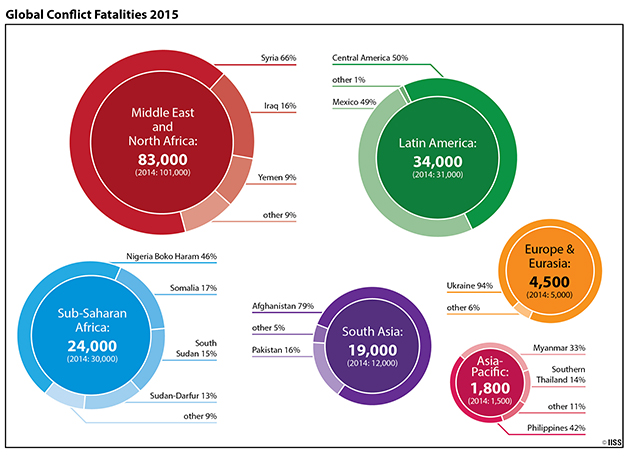 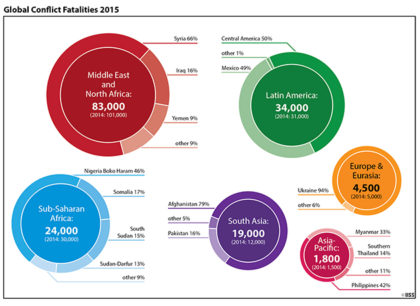 The International Institute for Strategic Studies issued its annual Armed Conflict Survey showing that the region of the Middle East and North Africa continues to top the global list of conflict fatalities with 83,000 people dead in 2016.

The global think tank with offices in the UK, USA, Asia, and the Middle East, noted that one-third of all global fatalities occurred in Syria with a death toll amounting to 55,000 people, accounting for 66% of fatalities in the MENA region and 44% of global fatalities.

The war in Syria remained the world’s most lethal, as this year’s toll brought the total number of deaths since 2011 to around 290,000, says the author of the report.

The MENA region was followed by Latin America where 34,000 were estimated to have lost their lives in conflicts. Conflicts in Mexico and Central America accounted for 21% of global fatalities.

Sub-Saharan Africa saw a drop of conflict fatalities with a combined death toll of 24,000, the survey showed, noting that the largest year-on-year increase in fatalities was registered in Afghanistan with 16,000 death compared to 3500 in 2013.

These conflicts have also exacerbated displacement with refugee numbers surging from 33 million in 2013 to 46 million by mid 2015, the Survey said.