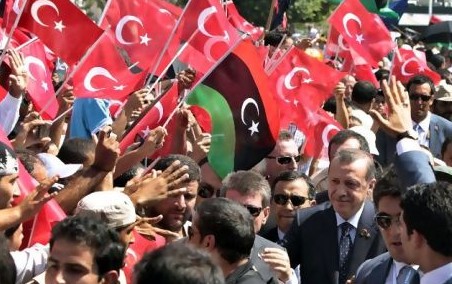 The Arab revolutions of 2011 have brought into immediate focus the following question related to Turkey’s foreign policy: ‘Can Turkey’s economic and political model become a reference-point for the region’s post-autocratic societies, similar to the EU for east-central Europe after 1989?’.

Indeed, many political observers see the revolutions in the Arab countries as a chance for Turkey to achieve its ambition of becoming a regional power with global relevance. Turkey’s, or to be more precise, AKP’s (Adalet ve Kalkınma Partisi – the governing party of Turkey) change in foreign policy has actually increased the potential for such a development. It was through the implementation of a strategic depth, a mere Turkish version of realpolitik, which defined Turkey as a Middle Eastern, Balkan, Caucasian and North African country – a notion and a theory, encouraged by Turkey’s Ottoman legacy, that now Turkey is exploiting to further its own national interests.

Turkey’s image as a role model has not come as a coincidence since from the very start of the Arab awakening, Turkey stepped in and played a constructive role. It was Turkish foreign minister, Ahmet Davutoglu, who travelled to Tunisia and encouraged a democratic institution-building process. And, it was prime minister, Recep Tayyip Erdogan, who criticized and urged the Egyptian president Hosni Mubarak and his Syrian counterpart Bashar al-Assad to listen to the people’s demands and step down. However, the most important reasons for the Arab states’ emulation of Turkey as the role model could well be Turkey’s economic success story, currently the 16th largest economy in the world, and the ‘Islamist’ AKP government clinging to democratic principles. Though Turkey is not an Arab state, what it has in common with its Arab neighbors is its religious identity. In that sense, it could serve as a good example for the Arab countries in because if a country with 99% of the Muslim population can be governed liberally and democratically, then indeed Islam can peacefully coexist with democracy. It follows that the Turkish ‘model’ could be the one befitting the other predominantly Muslim countries, rather than the ‘model’ promoted by the West.

The Turkish prime minister Erdoğan also attracts popularity in Arab countries as Turkey’s economic and political success is undeniably attributable to him. Erdogan’s appeal in the streets of Cairo, Tunis, Damascus and Tripoli gained momentum following his 2009 speech in Davos when he criticized Israeli President Shimon Perez for the way Israel was handling its Palestinian issue. Furthermore, it was as a result of Erdogan’s open threat against Israel and his demand that Israel apologize with regard to the May 2010 Mavi Marmara flotilla affair causing the death of 9 Turkish citizens that boosted Erdogan’s image throughout the Arab world. Last but not the least, it is no secret that Turkey is interested in establishing a firm media presence in the Arab world through the creation of an Arabic-language satellite channel and broadcast many Turkish TV series where images of stability and co-existence of Western lifestyle and Islamic culture are shown on a daily basis. Turkey’s rise as a role model has also evolved in a period and region that presently lacks any kind of leadership – particularly with post-Saddam Iraq in complete disarray and Ahmadinejad’s Iran being on the verge of collapsing from the numerous sanctions that have been imposed on it owing to its nuclear ambitions.

With that said, it is not a surprise that, according to the 2011 Annual Arab Public Opinion Survey, Turkey was ranked first with 50% for its constructive role throughout the period of the Arab awakening. Erdogan’s popularity also figures in the same survey where 38% of Egyptians polled preferred their next President to look like Erdogan. The same survey concluded that 31% of people in five countries, the United Arab Emirates, Egypt, Morocco, Lebanon, Jordan, also preferred their next respective leaders to look like Erdogan. In addition, a research conducted by the Turkish Economic and Social Studies Foundation (TESEV) revealed that Turkey owes its popularity among the Arabs for its democracy by 32%, its working economy by 25% and, last but not least, because of its Muslim identity by 23%.

On the other hand, one should stay cautious as a recent survey conducted by TESEV in August 2012 with 2800 people from 16 Arab countries showed that, despite the ongoing popularity of Turkey as the main actor and the role model in the region, its popularity dropped to 69% from the last year’s 78%. The lowest level of support was seen in Syria and Iraq. This decreasing popularity was mainly attributed to the fact that Turkey’s foreign policy has recently abandoned its balanced and impartial attitudes – as could be seen in Syria and Iraq – and started pursuing a more interventionist policy. For many people in the region, this was interpreted as Turkey preferring a foreign policy conducted along its preferred religious orders and sects. This may not be the reality but this is the image created by its own acts. Ankara’s changing approach to its neighbors also influences the foreign policies of some states in the region as they are also starting to look at Turkey through their own political and ideological prisms and shape their foreign policies accordingly.

This actually shows that, although Turkey is seen as the role model and the most influential country to contribute to peace-making process and democratization efforts in the region, the slightly changing dynamics of Turkish foreign policy have caused negative reactions in the Arab countries and led to its decreasing popularity. The current government and Turkish opinion-makers should carefully analyse this situation and take it into consideration when formulating their policies towards its region and the Arab world as a whole. The preeminent Turkish role and influence are stable, but they should not be taken for granted.