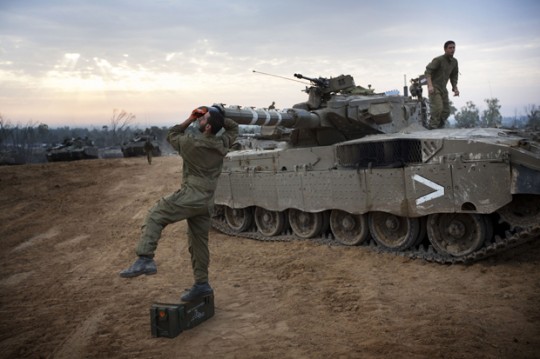 Israel-Gaza Truce – Peace until the Next War?

Recently, a truce was mediated – by Egyptian president Mohammed Morsi – between Israel and the Palestinians in Gaza. But … how long can such a truce last before the new round of warfare is unleashed?

Notwithstanding many obvious analogies with the previous tensions between the two sides (such as Operation Cast Lead at the late 2008), there are some important differences between the dynamics of the current clash and the Israeli-Palestinian conflicts in the past.

For example, in contrast to the previous attempts at conflict resolution, the recent truce was mediated by Egypt led personally by president Morsi. Hence, it is possible that the Egyptian Muslim Brotherhood will have a greater influence over Hamas than the former Mubarak’s establishment, though it is still too early to confirm this. We can also hope that the Israeli side will develop more effective attitudes towards Gaza that would involve mainly economic relief and easing of the blockade of Gaza.

In the last election, Israeli prime minister Netanyahu spoke about “economic peace,” which was meant as an economic relief for the Palestinian territories. It was applied to some extent in the West Bank (hand in hand with the so-called “natural growth of the Jewish settlements”), but not in the much poorer and more problematic Gaza. The current situation in the Gaza strip that feeds ever greater anger, poverty and extremism (sometimes nurtured by Israeli military operations) just cannot be perpetuated indefinitely. Generally speaking, in the history of human conflicts, the destructive forces have often activated opposition forces from lethargy – in line with the saying that “without sinners there would be no saints”. Since the level of destruction in the Israeli-Gaza conflict is already so immense, we can only hope in the emergence of constructive personalities on both sides who will be equipped with some creative ideas and have a effective policy ‘toolbox’ at their disposal.

In the era of Facebook and Twiter, political crises and conflicts are gaining yet another dimension due to the worldwide impact of the Internet – it could be called ‘civic media war’. So if you are active on any of the social networks and at the same time you are interested in what is happening in the Middle East, you can be sure that you will find yourself inside the whirlwind of media war. The dozens of images of mutilated Palestinian children or, conversely, photographs suggesting almost genetically treacherous nature of the Palestinians will appear on your screen.

It is also striking how many educated people readily participate in the spread of delusions and propaganda. For example, I led a long and futile discussion with my Palestinian friends on the Facebook about a footage titled ‘Shocking video: What the Zionists Really Think’ where protesters in Tel-Aviv are chanting racist slogans against the Palestinians, trying to convince them – unsuccessfully – that this was not in fact a spontaneous manifestation of the Israelis expressing their “true view of the Palestinians.” In reality, this was a demonstration organized by one of the most radical factions of the Israeli society – consisting of the followers of the racist Rabbi Kahane. On the contrary, from the supporters of Israeli policy, I have ‘learned’ recently that the best peace plan for the Palestinians in Gaza which can be summed up as: 1) total bombing, 2) total bombing, 3) total bombing – because they are essentially a collectively rogue nation… I can perhaps understand that if someone has a personal bond with the territory of the conflict, it is sometimes hard to keep emotions in check. But even this cannot serve as an excuse for any kind of inhumane actions, verbal abuse and the use of an openly discriminatory language.

When I was in Israel and Palestine a few weeks ago, it was interesting to observe that despite the lack of political solutions in the Israel-Gaza conflict, there was something positive happening in terms of interpersonal relations. For example, I had never before seen so many Palestinians shopping in the Jewish West Jerusalem. I remember that a few years ago the movement of people between the West and East Jerusalem was almost non-existent – very few people from the Arab part went to the Jewish part and vice versa. Similarly, I recently noticed a much more relaxed atmosphere in Jericho, Bethlehem and especially in Hebron.

I spent quite a long time in a big bus with Israeli signs moving through the Palestinian part of the city without any problem. Likewise, in the Jewish-settler quarter of Hebron, where you can usually feel the omnipresent tensions, this time there was an overall relaxed atmosphere and the usually nervous Israeli soldiers even let us go into normally inaccessible places. It looked as if the people on both sides began to forget politics and focused more on the practical things of everyday life. But after the latest escalation of the Israeli-Palestinian violence, it looks like this positive development has – again – been reversed…