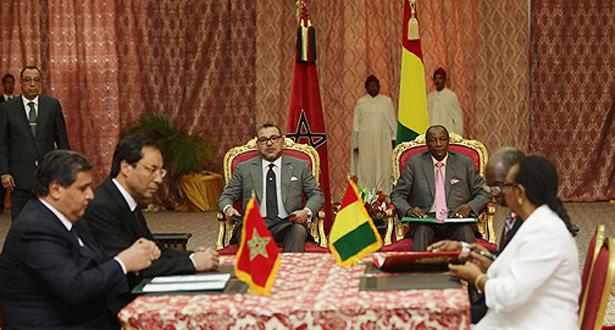 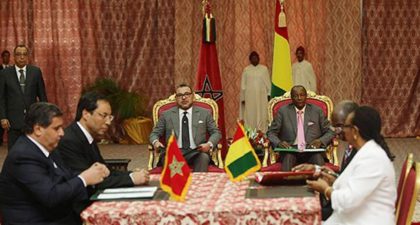 Morocco and Guinea added yet another milestone to their longstanding cooperation ties with the signing of eight cooperation agreements covering notably urban planning and agriculture.

These agreements were signed Thursday at a ceremony in Conakry chaired by Guinean President Alpha Condé and King Mohammed VI who is in Guinea as part of a new African tour that previously led him to south Sudan, Ghana and Zambia.

Prior to the signing ceremony, King Mohammed VI held talks with President Alpha Condé whose chairmanship of the African Union played an instrumental role in blocking attempts to thwart Morocco’s legitimate right to regain its legitimate place within its African institutional family.

Following Morocco’s return to the pan-African organization with an outspoken majority support from Member states, President Condé welcomed the comeback of Morocco to its African institutional family and lauded the Moroccan King’s speech saying: “the Organization of African Unity found itself again.”

“The capacities and excellence of Morocco” are “assets for the African Union,” President Condé had told the 28th AU summit in Addis Ababa that enacted Morocco’s return to the African fold.

And during the eight agreements signing ceremony Thursday, President Alpha Condé voiced satisfaction at the strong cooperation ties binding the two countries and said the King’s two visits to Guinea, namely in March 2014 and this current February, benefit his country.

“The two visits by H.M. the King to Guinea benefit the country, as evidenced by the several agreements signed” between Rabat and Conakry, he pointed out, lauding Morocco’s willingness to provide all material and technical assistance to upgrade the city of Conakry and improve its road network and liquid sanitation.

The Guinean President also expressed heartfelt thanks and gratitude to the King, and commended Morocco’s aid to Guinea in the sector of agriculture.
Actually, among the accords signed Thursday, a memorandum of understanding provides for supplying the West African country with 100,000 tons of fertilizers, out of which 20,000 will be donated by Morocco. 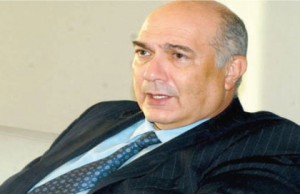 CEO of OCP Group, Mustapha Terrab, said at the signing ceremony that the 100,000 tons of fertilizer would cover the needs of the current agricultural season in this country.

Guinea will be the first African country to meet the objectives of the 2006 Abuja Declaration, which aims to provide African farmers with sufficient quantities of fertilizer for their crops, he went on to say.

Other agriculture-related agreements deal with the implementation of projects for the aggregation of maize production in Guinea, and with carrying out a hydro- project to cover a farming area extending between 200 and 300 ha.

Besides the public and private investments Morocco leads in Guinea, the West African country is part of the Africa Atlantic Pipeline project, which will catalyze regional integration and boost energy security by channeling Nigerian gas through the Atlantic coast up to Morocco and maybe to Europe.

On Friday, after the two Heads of State performed the Midday prayers, they visited the two Temenitaye and Bonfi fishing projects that required a $1.28 Million investment each. The financing of the two projects was provided by the Mohammed VI Foundation for Sustainable Development, the Ministry of Agriculture and Fisheries and the Banque Populaire Group. The two projects to become operational in March will improve working and living conditions for thousands of fishermen, upgrade the economic performance of traditional fishing, ensure the transparency of commercial transactions and increase the income of beneficiaries.

King Mohammed VI who arrived on Thursday in Conakry for a working and friendship visit to Guinea, is expected this Friday in Côte d’Ivoire.