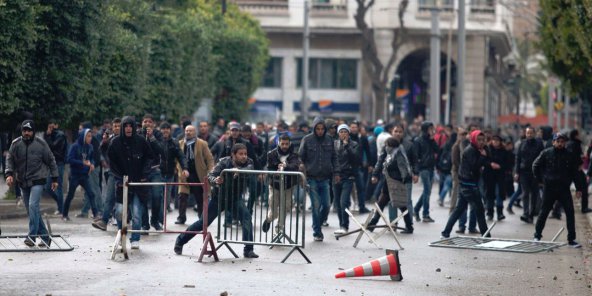 Tunisia: 11 demonstrators sentenced 14 years in prison each for protesting against Chokri Belaïd’s killing 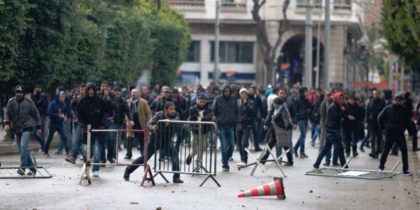 A first instance court at Nabeul has sentenced eleven people to fourteen years in prison for attacking a police office and using arms in 2013 at Kelibia as they protested against assassination of Chokri Belaïd, a political figure, a judiciary officer says.
The ruling according to Rihab Mhadhbi, spokesperson of the court, was made in October but was only made public this week.
The attackers were arrested in February 7th, 2013 during a nation-wide violent protest against the shooting of Chokri Belaïd. The leader of opposition El-Watad movement, opposed to Islamists Ennahda, was killed by two gunmen early in the morning the previous day as he came out of his house, in El-Menzah VI, in Tunis. His killers managed to escape.
The Islamic State group (IS) in July 2013 claimed responsibility for the attack.
His death sparked violent protest across the country and in capital Tunis.
The accused now aged between 21 and 28, have been charged for “voluntarily setting ablaze a non-residential place”, “participation in armed rebellion” and “aggression on public worker”.
Right activist and local director Tunisian Human Right League, Nabil Mtaallah slammed the court decision which she deems “too harsh”. She has been working the case since its inception.
The arrestees have rejected the ruling and expect to lodge an appeal.
Some of the accused Mtaallah noted were only photographed in front of the police station, one with a stone in one hand and the other holding a police helmet. The latter was charged for theft.
24 people arrested in June 17th, 2015, in connection to assassination have not been tried yet. The trial was initially postponed to October 28 but has been again put off to December 27, Jeune Afrique reports.