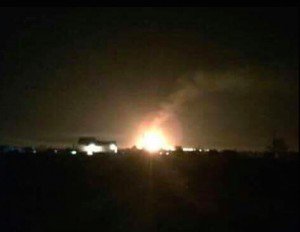 Libya: US Air Strikes Kill Dozens of IS Fighters at Sabratha

US Air Force F-15E jets early Friday killed more than 30 IS fighters outside the town of Sabratha said to host an IS training camp which trained the Tunisian jihadists who hit Tunisia in March and in June last year.

The strikes were reportedly targeting a Tunisian notorious jihadist known as Noureddine Chouchane who allegedly orchestrated the two attacks in Tunisia.

The death toll has been raised to 41 by the major of the town, Hussain al-Dawadi who also added that six other people had been wounded in the air strikes. Dawadi also explained to reporters that the raid took place in Qasr al-Allagh, a farming district about five miles outside the town.

Reports also point out that most of the victims were Tunisians.

This is the second major air strike by the US air military. In November last year, US officials claimed they killed the terrorist group’s top commander Libya.

Wissam Najm Abd Zayd al Zubaydi, an Iraqi citizen described as the leader of the terrorist group in Libya, was reported dead in Derna in a US raid but his surrogates rejected the claims saying that he left Libya before the raid.

The New York Times also reports that American and British Special Operations teams have increased in recent months clandestine reconnaissance missions in Libya to identify the group’s leaders and to map out their networks for possible strikes.

President Obama recently instructed his security committee to monitor development in Libya and propose plans on how to take on the terrorist group.

Reports also indicate that Washington is looking for $200 million budget to launch the offensive in the North African country.

President Obama reportedly this week vowed to go and fetch IS wherever it is including Libya.

“With respect to Libya, I have been clear from the outset that we will go after ISIS wherever it appears, the same way that we went after Al Qaeda wherever they appeared,” Obama said.

“We will continue to take actions where we’ve got a clear operation and a clear target in mind,” Obama said.