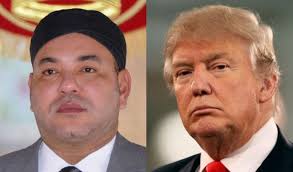 King Mohammed VI has renewed his determination to work together with the new President Donald Trump “to achieve optimal implementation of the strategic partnership” between Morocco and the United States.
In a message of congratulations to Trump on the occasion of his election 45th President of the United States, the Sovereign underlined the close friendship and mutual esteem between the two peoples, as well as the solid, historic bonds between the two countries.
“I am also keen to enhance dialogue, coordination and consultation between our two countries on all issues of common interest, particularly with regard to the growing challenges posed to world peace and security, in order to counter all forms of extremism, violence and terrorism and to help find just and peaceful solutions to conflicts and tensions around the globe,” underlined the King in his message.
The Sovereign, who wished Trump success in his new mission and endeavors to lead the American people towards further progress and prosperity, expressed his appreciation for the United States’ continued support and keen interest in the major structural reforms initiated in Morocco with a view to promoting the country’s comprehensive development. The King also hailed the interest Washington has always shown in the Kingdom’s efforts aimed at achieving peace and stability in the region and in its various initiatives to build up an integrated Maghreb Union that can help shield the region against the security threats it is facing and ensure the progress and prosperity of its peoples.
The US ambassador to Rabat Dwight L. Bush said Tuesday before the announcement of the results that the United States and Morocco will remain strong, regardless of the results of the US presidential election.
These relations will remain “strong as they have always been,” the Ambassador said.
Echoing the ambassador, Deputy Chief of Mission Stephanie Miley said that “whatever the outcome of the elections, relations between Morocco and the United States will remain “strong and privileged” given that the two countries “share common values and common interests and maintain very deep historical ties that will continue to develop.”

North Africa Post's news desk is composed of journalists and editors, who are constantly working to provide new and accurate stories to NAP readers.
NEWER POSTCOP22 Side Event Sheds Light on Climate Change as a Root-Cause of Instability in Africa
OLDER POSTTunisian PM Eyes France as Savior at “this Critical Moment”