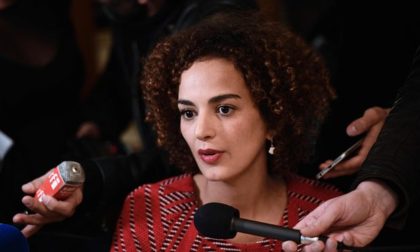 Moroccan-French 35 year-old journalist and writer Leila Slimani has been crowned winner of the French most prestigious literary award Prix Goncourt 2016 for her book “Chanson douce”, making her the first woman of Moroccan origin to get this award, which won her a personal congratulatory message from Morocco’s King Mohammed VI.

Leila Slimani on Thursday snatched the prize for the captivating tale she offers her readership. “Chanson douce” beginning with the words “the baby is dead” tells the story of a US-based nanny who murdered two children she was looking after.

The book published by Editions Gallimard is already a best seller in France. “Chanson douce” is already the subject of translation rights agreements in 15 countries.

Born in Morocco in 1981, Slimani is daughter to a former Moroccan prestigious banker and an Algerian woman. She left for Paris at the age of 17 to study political science but later fell in love with journalism. She worked for Paris-based weekly “Jeune Afrique” until 2012 and then devoted her time to her favorite occupation; writing.

She is also author of “In the Garden of the Ogre”. The book depicts the story of a lazy journalist addicted to sex.

The award has not gone unnoticed in Morocco. King Mohammed VI conveyed his congratulations to the young writer, noting that the prize mirrors the competences of Moroccan expatriates.

“The award is not only an honor for you and for Moroccan women, but also an example of the competences, which our Moroccan community living abroad boasts in the different fields,” the king wrote in his message to the Goncourt winner.