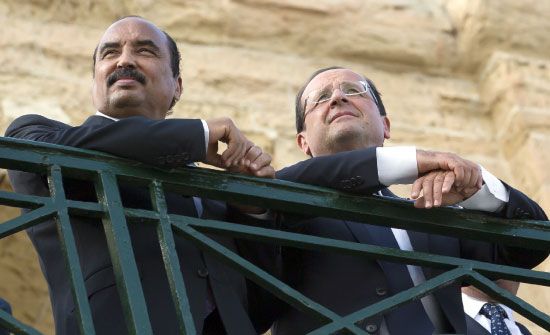 Has the Meeting with Hollande Spared Mauritanian President a Coup?

After President of Mauritania Mohamed Ould Abdel Aziz was wounded by gunshot last October 13 in what was officially described as a “an accidental shooting”, he appeared on his country’s State TV to reassure its countrymen that he was in good condition before being airlifted to Paris for further treatment.

From that time, there were no reports on his health condition, on the treatment he was undergoing or on the duration of his hospitalization.
Despite the official assurances that it was an accidental shooting, many Mauritanians thought it was rather a failed assassination attempt by Al-Qaeda affiliated groups, especially as these groups had threatened to retaliate after Mauritania launched in 2010 and 2011 several attacks on Islamist bases across its border with Mali. Another version circulated in the country claimed the shooting was the result of a dispute over a woman, involving the President and another man.
No matter the cause, the Mauritanian opposition halted all protest movement in the wake of the shooting.
However as authorities were keeping silent on the president’s condition, the opposition started claiming more information and criticizing the presidential power vacuum that lasted for too long, it said. It was only on October 24 that a presidency official announced that the President left the Percy Hospital in Paris where he had been treated for the gunshot wounds and that he went to his country’s embassy in the French capital, without disclosing when the president would return back home.
Almost a month later, there were no hints as how he was or when he would return to Mauritania. The President’s long absence gave reason to his rivals to start considering a post-Mohamed Ould Abdel Aziz era.
Officials from the ruling sphere and opposition figures have reportedly held a meeting to sketch out a post-Mohamed Ould Abdel Aziz scenario and a day of protest was planned for last Wednesday by the major opposition party.
According to commentators, the opposition was going to seize the opportunity of the day of protest to topple President Ould Abdel Aziz, who had himself taken power in 2008 following a military coup.
Then the President appeared as if by magic. He was received at the Elysée by French President François Hollande and later on addressed the press and announced that he would go back in the few coming days.
The meeting seemed to have spared him a coup that was planned for the following day.
Was the meeting between the two presidents held just by chance or was it dictated by intelligence services which heard about the coup that was in the air?
No matter the reason, the meeting seems to have saved President Ould Abdel Aziz to the delight of France, which sees in him a precious ally in the Malian crisis. Mauritania is, according to observers, the only Arab country in the region that may be involved militarily in the Malian conflict, in case a military intervention does take place. Some analysts say a military involvement in Mali can hardly be backed by the Mauritanian people while others go as far as saying that such an involvement may lead to the toppling of Mauritania’s strongman or even to his assassination.
The question that remains so far without answer is whether France can actually talk President Ould Abdel Aziz into participating in a war in Mali while giving him assurances as to his personal safety.

North Africa Post's news desk is composed of journalists and editors, who are constantly working to provide new and accurate stories to NAP readers.
NEWER POSTAlgeria: Gap Widening between Regime Favourites and Majority of Population
OLDER POSTMauritanian President Denies any Foreign Involvement in his shooting