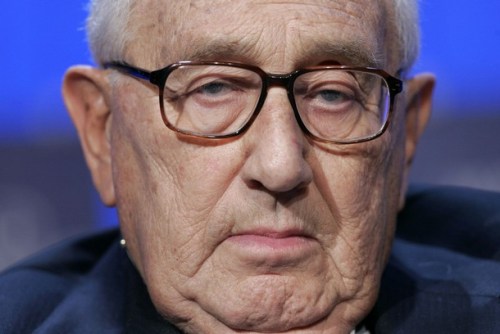 What Arab Spring? The Folly that is Henry Kissinger

When the 26-year-old fruit vendor, Mohammed Bouazizi – after being slapped around by local authorities one time too many – in an act of desperation and protest, set himself on fire in the Tunisian city of  Sidi Bouzid, no analyst or politician could have foreseen the wave of regional uprisings that were to follow. What began as an act of frustration, led to a broad regional movement that has already forced four autocratic regimes out of office. But while this revolutionary movement came as a surprise, it was always certain that Henry Kissinger, the former US Secretary of State and National Security Advisor, would emerge as a leading voice among the chorus of cultural pessimists, who fancy themselves realists and would warn against abandoning the US former allies.

As usual, Kissinger’s argument is delivered with a characteristic amount of rhetorical ambiguity: “In Egypt, backing a military council composed mostly of Mubarak associates offends democratic sensibilities. Postulating shared values with an explicitly Islamist party, which for generations has advocated an anti-Western course for the entire region, substitutes hope for experience. Military regimes have proved fragile; ideologically driven organizations have used democratic institutions for undemocratic ends and to challenge regional order.”

Kissinger’s wording practically invites careful parsing. The former Secretary of State argues that backing the military would offend what he calls democratic sensibilities. In reality, of course, backing the military would embolden a reactionary power centre and undermine any democratic progress the country has made since the ouster of Hosni Mubarak. Summarising that as offended sensibilities has hence a certain cynical tone to it. It is also revealing that Kissinger’s paramount problem with the Muslim Brotherhood is its anti-Western rhetoric and not its questionable commitment to democracy. It is, of course, also a gross understatement to argue that military regimes have proved fragile, though, rather thankfully, Kissinger here at last describes the alternative that he is, let us say, weighing in clear terms. Moreover, one is led to wonder what party involved in politics is not driven by some sort of ideology. But it takes a Kissinger’s sort of realism to fully dismiss the many debates the Muslim Brotherhood is currently having within its own organisation.

Against the background of Kissinger’s oddly phrased case for a reactionary policy vis-à-vis the Middle East, one is well advised to look into the Arab Spring with a little more attention to detail. For more than a decade, the Middle East has slowly inched towards modernity. And while the kingdom of Saudi Arabia, the sheikhs in Qatar and the United Arab Emirates and the rulers in Northern Africa raced towards new records in high-rise buildings, demonstrating how they adapted to globalisation and modernity, their political and economic reforms lacked in speed and substance. Against the backdrop of a deficit in economic and political reform and a population that is increasingly younger and was, thanks to the internet, exposed to the workings and blessings of democracy abroad, it was always only a question of time before the youth would demand progress of a more substantive sort. Not only was a revolutionary movement increasingly probable, it was in fact inevitable. One would also like to remind Kissinger that the only way to entrench democracy in the Middle East must occurred by having Islamist organisations to undergo a process in which the alternatives are clearly formulated within the party itself.

Dictators called upon the military to quell the upheavals. But in both Tunisia and Egypt, the military refused to step in to buttress the regime

Yet, a revolution rarely succeeds on its own. While most analysts clearly saw that a change was coming, the lack of credible opposition leaders indicated that the opposition was too fragmented and lacked consolidation and momentum to succeed. Even though revolutions have been contagious in the past, realists were largely surprised when the Tunisian Spring turned into a widespread movement of revolutionary change across the region. In Tunisia, Egypt and Libya, the dictators called upon the military to quell the upheavals. But in both Tunisia and Egypt, the military refused to step in to buttress the regime. The refusal to execute orders, be they legitimate or not, is nothing less than a coup d’etat, in itself an intervention of the military in politics. In Libya, it needed a military intervention from the outside. The point is this: Whether such an intervention was domestic, as in the case of the Mubarak’s ouster, or is conducted by foreign forces, as in Libya, hardly ever can a revolutionary movement succeed squarely on its own.

Our efforts must also be placed within a framework of US strategic interests, which should help define the extent and nature of our role

Whatever the movement is called, Arab Awakening or Arab Spring, it is important to note that it cannot succeed on its own. Yet, the situation, as it had been until 2010, was nonetheless untenable. What should a US policy in the region now look like? Let us turn to Kissinger for a final word of advice: “Our efforts must also be placed within a framework of US strategic interests, which should help define the extent and nature of our role. Progress toward a world order embracing participatory governance and international cooperation requires the fortitude to work through intermediate stages.”

Here, finally, Kissinger clearly advocates abandoning any promotion of democracy and embrace what he calls “intermediate stages” – something that can, supposedly, only mean a military interregnum. Rather interestingly, what Kissinger does not tell us is how long the untenable status-quo is to be upheld and when to move on to the next stage, whatever that might be. What Kissinger seems to have forgotten is that democracy is not only an end in itself but simply a process that produces better results than any other political system. The Arab Spring has always been inevitable, just as the folly of Henry Kissinger’s advice which, if implemented, would have inevitably lead us to end up on the wrong side of history.