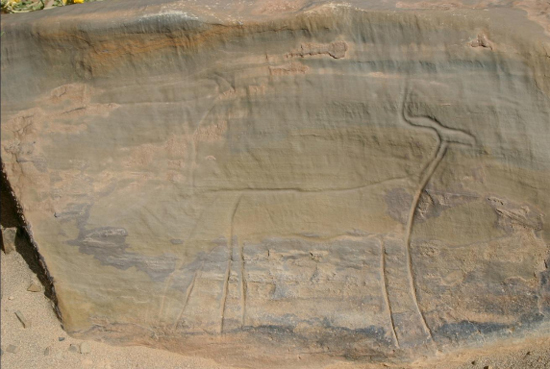 By 18 October 2012, a report that Salafis destroyed an 8,000-year-old petroglyph in Yakour Plain not far from Marrakesh quickly spread on Facebook and Twitter. The rock-drawing depicting the animistic divinity of the sun is one of thousands of stone carvings in the High Atlas and Anti-Atlas Mountains. Print and online newspapers repeated these rumors, forcing the Communications Minister, Mustapha Khalfi and the Culture Minister, Mohammed Amine Sbihi, to launch an aggressive campaign to denounce the news as pure allegations. The Moroccan government quickly denied the news for fear that they might affect its ailing tourism, already harmed by a decreasing number of foreign tourists. The weakening European economies, financial crisis and high unemployment continue to impact Moroccan tourism revenues.

This story underlines a major national cultural issue with potential economic implications for sustainable rural tourism, highlighting the importance of safeguarding thousands of historical rock-drawings, archaeological sites, and indigenous architecture as well as making them a key component of local rural economies throughout the southeastern provinces of Zagora, Ouarzazate, Tata, and Errachidia and the High and Anti-Atlas regions.

Recently, Marrakesh has been voted among the top ten tourist destinations worldwide. As the number of tourists to Morocco increases, Moroccan governments, including the Islamic-led government of Abdelilah Benkirane, have implemented economic plans where tourism is always a central player. Although the 2010 Tourism Strategy Plan emphasizes small communities-based tourism sustainably built around cultural and natural resources, this project has yet to take place throughout the country and benefit poverty-stricken regions.

As subsistence agriculture is sporadically affected by rainfall shortages and periods of drought, the rural population is left to face economic challenges, especially as few families have stable jobs and sources of revenue. While Marrakesh and other Imperial cities slowly improve their economic infrastructures, villages and communities around them struggle to make a sustainable living, pushing their inhabitants to emigrate. As the future gets dimmer in the villages, external as well as internal migration becomes the only option, putting more strain on already densely populated cities.

Throughout the Arab World and with the help of the UNESCO, Islamic cities (such as Rabat, Marrakesh and Fez) have been transformed into living environments where the conservation of heritage sites has gone in tandem with the design of new economic policies within the walls of historical cities. Communities of the Atlas Mountains could benefit from similar models of sustainable development. Southern communities throughout the Atlas face environmental challenges such as drought and desertification, which have put pressure on the fragile social and economic fabric of the communities. A new economic policy benefiting every fortified village (ksar) and house (kasbah) of the Atlas Mountains would energize and sustain the local economy through community-based cultural tourism.

An emphasis on cultural tourism could have some positive results, which might include limiting emigration as well as the disintegration of these vulnerable communities.

The tourism industry in Morocco could take advantage of the growing national and global demand for ecological and cultural tourism in both mountainous and desert regions. An emphasis on cultural tourism could have some positive results, which might include limiting emigration as well as the disintegration of these vulnerable communities. The potential is large. A large set of networks could be established between communities throughout the Atlas. Recently, the Rural Tourism Development Network (RDTR) was established in the region of Massa-Draa-Sous in May 2011 to improve local institutions, develop and design rural touristic circuits, train staff and tourist guides, and market local products. This regional project stresses both the creation of small local businesses and the development of strong cooperation between different sectors to compete with large tourism companies.

In order to alleviate the challenges that rural communities face, the Moroccan government and its ministries of culture, education, tourism and transport must take advantage of the economic potential that these regions offer and give incentives to local families to diversify their household economies. For example, an economic plan could target unemployed graduate university students with degrees in history, French, English, geography, Islamic studies, and economy and facilitate the creation of community-based lodges and inns that would be managed by these graduates in the form of small businesses. Every village or oasis could have one of these inns that allow tourists to stay overnight. These inns would also be linked to larger networks of national and global tourism operators. Accordingly, the government could prepare itself for the growing ecological vulnerabilities of these southern regions by sustaining a mutual dependence between the rich and diverse histories, cultures and architectures of the Atlas and the sector of rural tourism.

One of the key lessons of the recent Arab uprisings in Syria, Egypt, Tunisia, Bahrain, Jordan, Algeria, among others, is that the waves of social contestations have been led by disenfranchised groups either in rural regions or urban suburbs. As governments fail to keep their promises of subsidies, household vulnerabilities – especially in rural communities – will increase as environmental changes affect their traditional way of life. Governments throughout the Middle East need to take a lesson from this as quickly as possible – otherwise, they will not be able to manage an economic bubble and social crisis already in the making.