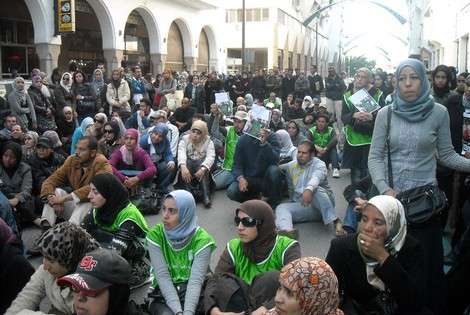 Abdurrahman, 30, graduated from college two years ago. Immediately after graduation he started the grueling job search process. First he applied for the public sector and took part in many hiring competitions but failed in them all. Then he sent his résumé to private employers but most of the time he received no answer and rarely did he receive letters of regret saying the company had no openings for his profile.

Abdurrahman who lives in Fez joined one of the numerous groups of jobless graduates who daily pound the pavement in front of the Parliament in Rabat. “Instead of being hired, we are assaulted psychologically and sometimes physically.  I have been unemployed for two years now. My hopes to find a job are fading away, and each year that goes by, hundreds of other graduates and undergraduates join our ranks. It is a sad, shameful truth,” says Abdurrahman.
Over the last decade, unemployment has been one of the main problems facing up successive governments in Morocco. Today, the coalition government led by The Justice and Development Party (PJD) needs to take up the same challenge and honor its electoral promise to reduce the jobless rate to 8 percent by the end of 2016 from 9.1 percent at the start of 2012.
According to the World Labor Organization, youth unemployment in North Africa region in 2012 rose to 27.9 percent with an increase of 5 percent following the Arab spring. According to ILO forecasts, the rate will drop to 26.7 percent by 2017.
The Moroccan Economic and Social Council, which confirms that unemployment in Morocco stands at 9.1 percent, says the rate hits 31.1 percent among young graduates. The council reports that it takes 65 percent of unemployed youth an average of one year to land a job.
The government plans to hire 25 thousand job seekers in the public sector in 2012. However, this number is not enough to meet the increasing demand and the government has been severely criticized for its failure to create enough job opportunities.
Like Abdurrahman, Mohamed. K is a jobless graduate who has given up hope to find a job. Being from the underprivileged strata, he cannot afford to start his own business. At the same time he can no longer stand to live off his parents. “We heard many promises about hiring old and new graduates in the public service. But all promises were mere lies. Now, the situation is getting worse. Lately, the government announced that they can do nothing for the unemployed and that the problem is out of their hand!!!” says Mohamed.
Inger Andersen, World Bank Vice-President for the Middle East and North Africa (MENA), underscored the government’s role to support youths and needy citizens to create sustainable development projects.
“Youth make up a significant proportion of Moroccan society and tackling the unemployment that plagues their young ambitions must be a priority for all of us,” said Andersen. She added that the World Bank is conducting projects for youth to support their presence in the Moroccan economic fabric and social life.
Zahraa has just graduated in July and is already so frustrated. “All along the years I spent in the university, I was nurturing hopes. I was having dreams. I was already dividing up my would-be salary between my mother who worked hard to send me to college, my younger sister who wanted to attend a private school, my brothers who were eager to practice soccer, and, and, and…Now, all my dreams are shattered,” she says bitterly.
She says she did not realize that there were so many young people who are still looking for their very first jobs, three, four, five years after graduation. “It’s a nightmare,” laments Zahraa, echoing the frustration of thousands of idle graduates.
To address the graduates’ unemployment phenomenon, which is worsening in view of the impact of the international economic crisis on Moroccan economy, the Moroccan Economic and Social Council recommended the government to support self-employment efforts, give incentives to the creation of small businesses, enact new regulatory laws and implement more educational reforms.
The recommendations leave Abdurrahman unmoved. They are not enough to create the thousands and thousands of jobs needed in Morocco, he says before turning around to catch a train back to Fez.