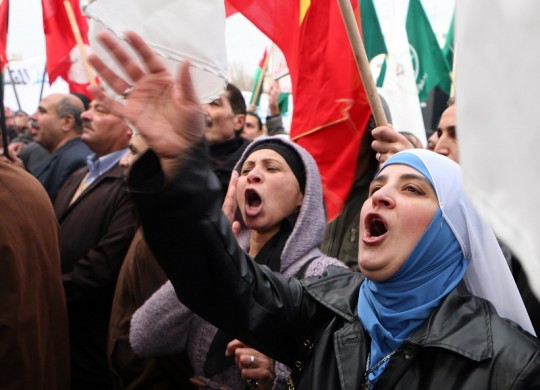 Interview with Sadi Shanaah, an influential Czech-Palestinian political analyst and director of INSAAN – ‘Czech-Arab Centre for Cultural Dialogue’, about the roots of the Egyptian revolution, potential failure of Western media and U.S. support to the region.

Mr. Shanaah, a special advisor for the Middle East to Mitt Romney‘s presidential campaign, Walid Pharees, says that the conservative and Islamic groups have used the young, secular and liberal movements for social freedoms as a tool to get power, such as in Egypt. Could you comment on this argumentation?

Islamic groups were not prepared for revolutions, they were surprised by what happened and paralyzed for some time in terms of an effective response. Some groups (like the Salafis in Egypt) even stood by the regime at the beginning. Partially, these groups profited from revolutions started by liberal movements, but by default, because they had much superior organizations and a more appealing, though vague, ideology.

Also, before it will be the turn of more liberal movements and parties, it is the turn for political Islam now. Political Islam represents a modern reply to modern dilemmas and it needs to have the opportunity to prove whether it is capable of providing solutions or not.

How do you asses the so far massive U.S. support for the Egyptian army after the first elections?

Since massive military aid is the most formidable foreign policy tool the US has in their dealings with Egypt, it is only logical that this aid will continue as long as there will be willingness on the other side to take it.

Some argue that the Western media have made terrible mistakes in assessing the uprisings as an outcome of the lack of democracy. They claim that there was no fight for democratization but for social status. What is your take on the role of Western media in interpreting the Arab Spring?

I believe many Western media did make a mistake but one of not attempting to uncover the roots of the anger among the Arab public at large against their regimes – as if the demonstrations started in 2011 sharp and had no connection with what happened over last five years or in the 1970s or in the 1950s or, for that matter, in the 1920s. I think there were two major narratives: the revolutions are bread revolts or that the revolutions are akin to those of 1989.

Actually, in 1989, the students would not have succeeded if it was not for the workers’ support. Political and economic grievances have strong linkages – people think that a political system more akin to the one working in the West would bring less corruption and more prosperity. But, in order to avoid spiritual void and materialism, many people wished to reinterpret what they perceive as Islamic values (social and economic justice) to underpin the new system.

Connecting the push for political reforms initiated by the Westernized youth with the call for economic justice framed in Islamic values brought the regimes down. But it was too complex to be explained by the media and we ended up in reductionism and explanations based on Western experience devoid of the Middle Easter context.

To what extend would the revolution in the MENA region (Middle East and North Africa) have been possible without Facebook? Were social media really a key deal-breaker?

I think the social media in cooperation with pan-Arabic satellite channels made the revolutions possible. Otherwise, they would have surely happened too but slightly later and they would have been led by more traditional forces. In the past, when a person self-immolated in Tunisia or when some Tunisian city rebelled, no one knew about it in the country and the problematic zone was isolated by the regime forces and suppressed.

In 2011, it was not possible anymore. In this sense, the social media were a real deal-breaker in terms of ignition. The final result depended, of course, on the interplay of many more factors.

What is your take on frequent comparisons between the Arab Spring and post-1989 revolutions in Central and Eastern Europe?

While in Central and Eastern Europe, there was a broad public consensus on where to move after Communism (free market, liberal democracy), the Arab countries are still solving 200-year-old dilemma – how to be modern and, at the same time, preserve values and traditions considered essential. And there is a huge gap between various camps within the societies as to what is regarded essential and, furthermore, as to how the values and traditions themselves are interpreted.

The other difference is that of property. While post-Communist countries moved from state ownership to privatization and hence created completely new “elites” through a massive change of wealth but also values, the Arab countries already experienced privatization which actually had produced problems leading to the revolutions themselves. After the Arab Spring, the same economic elites are basically in charge of the countries in question.

They set the social and cultural trends too. Which means it is more difficult to shake off old habits and patron-client links that lie at the heart of many problems in those countries.

What are key points of these transitions? Could you compare their expected development?

I expect further fragmentation of the political Islam block. It is already happening. I expect consolidation of the “third” camp – parties not organized primarily around religious identity or ideology stemming from particular reading of religion. I think, inevitably, the Arab countries – whether they underwent revolution or not – will become more democratic but not necessarily liberal.

I hope the society will start a process of soul searching – that a debate will be opened about identities, role of religion and about the contribution of Arab states to the international community, to the mankind, if you will.

Could you describe in bullet points the differences between the Obama government’s and the potential Romney administration’s policies to the Middle East?

I think Romney would be more susceptible to the pressure of industrial-military lobby and to the hawks within the Republicans but I do not think he would engage in something Bush junior did. It would just manifest itself in some more controversial statements, some clumsiness and muscle showing.

In a situation of tension, this might lead the US into a conflict or it might make it difficult to the US to prevent one. Obama, on the other hand, did not do much too in terms of following up on his Cairo speech.

Until Libya, he backed off the Middle East agenda and we can only hope that, if he is re-elected, he will muster more courage to face off Israeli intransigence and play a more forceful but neutral peace broker between the Palestinians and Israel.

To what extent do you personally expect U.S. foreign policy in the Middle East to change if Romney gets elected? Would he reset the Obama‘s strategy of refocusing on Asia?

Partially, I already replied. I think Romney might reconsider pulling out of Afghanistan so quickly. But a lot of his Middle East talk was just posturing. The trend is really set for South and East Asia as a primary focus of the US and for the withdrawal of most of the troops and energy from the Middle East.

Some observers have argued that, in the wake of the last elections, Egypt has been slowly drifting out of the U.S. camp. Since coming to power, Egyptian president Morsi has already visited an impressive number of foreign capitals which has been interpreted by some as a recalibration of the country‘s foreign policy. While the U.S. influence in the Middle East and North Africa is said to be declining, China has managed to expand its clout in the region and thus stepping into the void. Another case in point could be Algeria that has traditionally enjoyed strong relations with China. Do you agree that these ongoing trends are significantly altering the geostrategic landscape of the MENA region, having strong implications for the U.S. key interests?

China does not and will not have bases or troops in the region and it will not give military guarantees either – so, for the foreseeable future, the US will still be the most important actor in the MENA region, especially in the Gulf area.

Even Muslim Brothers cannot afford to alienate the US. Saying this, I think nevertheless that many Arab countries will strive for more independent foreign policies that would give them more options and will not be as subservient to US interests as before which has implications for the US foreign policy.

The US will have to deal now with many more actors that just one dictator and, therefore, it will need to pay more attention to the Arab public, to political parties and to social movements in the countries. If Arab foreign policy will be more in line with public general opinion, then the US cannot afford anymore to ignore problems it could have ignored before.

The relationship will not put such a great emphasis on the military level or geo-strategic level, but issues like poverty, education, inequalities and economic efficiency will have to be paid more attention to. Ideally, speaking of Egypt, the ratio between military and economic aid should reverse.