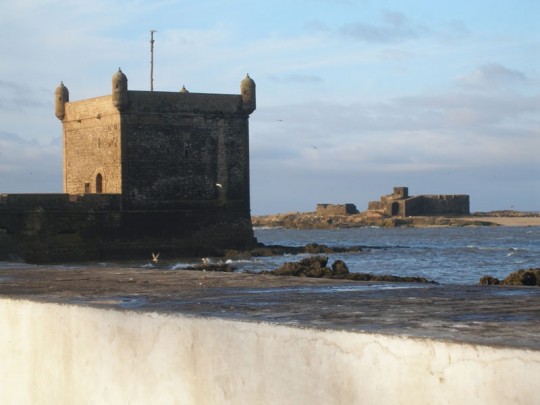 The Atlantic Vocation of Morocco

When in Rabat, Casablanca or any site on the Atlantic coast, go to the seashore, and sit there for a while watching the ocean, and dream….The experience might inspire you some beautiful poem or, at least, if you are an admirer of English poetry, bring to the surface of your mind some words woven by a Samuel Taylor Coleridge :

We stuck nor breath nor motion

As idle as a painted ship

Upon a painted ocean

(That sea forever starting and re-starting

When thought has had its hour, oh how rewarding

Are the long vistas of celestial calm ! )

Indeed, the sea is always reinvented. It is the same for The Atlantic as for the other seas and oceans. As a matter of fact, the Atlantic needs to be looked at in many different ways and, in particular, from different points of views and perspectives. When it comes to Morocco, it’s Atlantic vocation is certainly interesting to consider  for it is a country of diversity and cross cultures.
Start by a legend, some could imagine is true : when America was not yet called America, some adventurous Moroccan sailor led his men on a fragile ship beyond the tumultuous ocean, which, by the way, the Arabs call the “Al bahr al mouhit”, meaning the containing sea. They settled there and some of their descendants formed some Indian tribe. That is plausible and doesn’t make any difference anyway when it comes to real politics. It only helps to understand better why Morocco, among many neighboring  countries plays a role of ifs own.
Morocco, as it is well known, is the Far west for some and the beginning of the East for others. It is more truly, if you look at a map , as Geography is unavoidable, and draw some basic conclusions, at a crossroad of diverse worlds : Arab and Berber, Mediterranean, African, Atlantic.
But geography, although useful for the clear understanding of this, is not enough. You need to look at things from a larger perspective. You can therefore be in a position to have a more complete view through a tridimensional scrutiny : at the past, at the present and at the future.

1) The past : between the unknown and  fear

The unknown in the past was the ocean for everybody, and surely, because of ifs long coast from Tangier to Dakhla and even beyond, full of mysteries, so large and so unwelcoming.
The fear, because, all the dangers came from the Atlantic ocean: Invaders, whether Portuguese or Spanish in particular, but others also,  kept assaulting the coastal cities of Morocco and sometimes establishing permanent positions there :  Azilah, Azemmour,El Jadida, Safi, Essaouira, Agadir… As a consequence, I believe, both the people and the existing powers turned their back to the ocean, except in very few periods where the government was confident enough and strong. So was, for instance Mohammed Ben Abdallah, in the XVIII th century who revived Essaouira and few other coastal cities and who , by the way, allowed Morocco to be the first country in the World to recognize the United States of America as an independent nation in 1777.
Preference was given, most of the time, to the other possible extensions towards the South, the North and the East.
One has to wait for the XX th century, after the independence of Morocco from the French, to witness a shift in the way Morocco looked at the Atlantic and beyond the frontier of water it represented.

2) The present : between realities and promises

Coming then to our days, the realities of the new World Order as it was shaped by the victorious powers, after World War II, mainly by America, imposed rapidly themselves. Morocco had to adjust, naturally, the Atlantic , in fact, being not anymore perceived as mysterious or dangerous. It offered, actually, a full range of new opportunities of which the late King Hassan II took advantage remarkably, both at the economic and at the geopolitical levels. The ports and the fisheries developed and all kinds of relations started being more regular. From the geopolitical point of view, during the so called Cold War, Morocco succeeded in keeping a fine diplomatic balance between the West led by the USA and the Communist Soviet Union, with a clear preference for the liberal values and choices. Certainly, the only Arab country to have made that choice with some limitations, far less than any other country of the Region in the practice of Democracy. This entitled Morocco to Play a role of its one and, in particular, that of a Go Between in the Mideast conflict, especially during the process leading to Camp David Talks in 1978. Besides all this, Morocco established  strong ties with the NATO during these last decades showing more involvement in the Atlantic Space. Finally, the signing of the FTA with the USA in 2004, offers news scopes for the Atlantic dimension of Morocco in the mid and long terms.

3) The future : between new dangers and hope

We live in a Global World marked by three major characteristics on which almost everybody agrees : First the speed of change, political, economic, technological, social…, and the blur that results from it in our vision and understanding of things. How to deal with it ? Can the Atlantic dimension of the country be any help ? The dangers are real and the risks immense. Second, the environmental issue which poses unprecedented challenges to all countries, Morocco being no exception, especially when you have in mind the Atlantic ( I am referring to the disappearing fisheries and the maritime pollution). Third, when the so called clash of civilizations and cultures, or at least the misunderstandings leading to actual conflicts, appear to be a certainty, Morocco could be the missing link, a bridge between the Arabo-Islamic World and the neighboring countries of the Atlantic. Morocco is entitled to play an active role in contributing to a more peaceful World and expect a more fruitful cooperation with others. That is why it is not unrealistic to talk about an Atlantic vocation of Morocco as a sound basis for peace and cooperation in the Region.