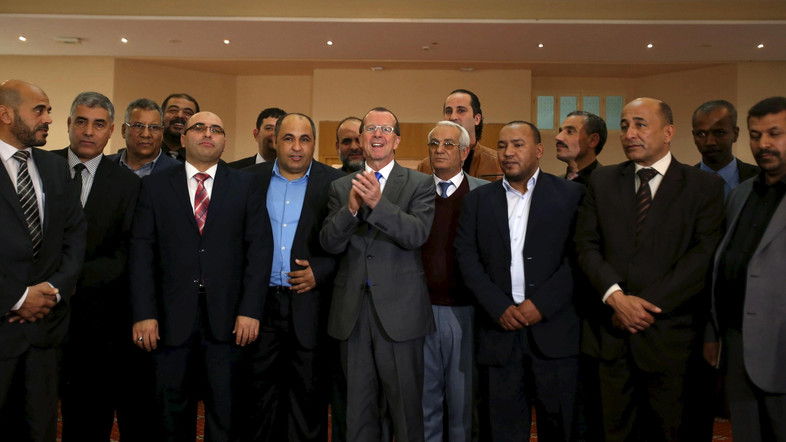 Libya: GNA gets backing of 24 municipalities 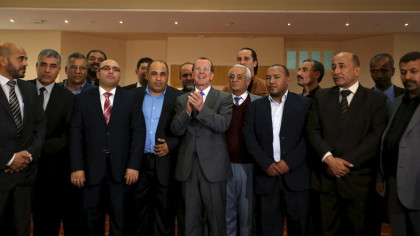 Libya’s approved Government of National Accord (GNA) Monday received a major endorsement from 24 Libya municipalities which threw their support behind Serraj-led government.
The 24 municipalities among which cities of Sabratha near Tripoli, Zintan, Al-Baida, Misrata, traveled to Tunis where they stood in support of the GNA.
Hosting the meeting, Head of UNSMIL Martin Kobler was delighted that the GNA is further receiving backing from wider range of Libyan public figures who are directly in link with the Libyan people.
“I’m very happy there are 24 signatures of the Libyan political agreement by mayors. This is a good sign,” Kobler told reporters after a meeting at Gammarth in Tunisia.
He hailed the signatories for the brave move but reminded them of the challenges still standing on the way of implementation the agreement signed in Morocco last week.
Kobler highlighted the significance of the participation of majors in the process as he called on them to urge their people to support the deal.
“It’s very important that municipalities become part of the Libyan political agreement which was signed in Skhirat three days ago,” Kobler said before adding “People need clean water and need electricity and a strong government can deliver this.”
“That’s why I asked the mayors to go back to their municipalities and to tell their people to support the agreement in order to have electricity, to have water, to have functional hospitals and schools,” he went on.
Tripoli is still opposed to the GNA deal however Kobler said the window is still open to have other fringe of hardliners join the process.
Libyan rivals camps; House of Representatives (HoR) in Trobruk and the General National Congress in Tripoli Thursday last week in Morocco inked the GNA deal and had agreed to lay down path to the restoration of Libya’s stability and progress following four years of division and fragmentation of the country after the death of Col Gaddafi killed in a revolution supported by the NATO.
Hardliners in opposed camps distanced themselves from the signing saying that they did not approved the composition of the UN-proposed unity government to be led by GNC member Serraj.
The UN Security Council is yet to vote a UN resolution recognising the GNA as the sole Libyan administration, Kobler told reporters.