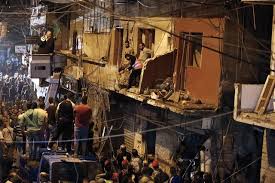 Lebanon: At least 41 dead in IS Beirut attack

The death toll of the twin bomb attack on Thursday in Beirut claimed by the Islamic State group increased to 41 with more than 200 people injured. The attack took place in a Shia neighborhood where Hezbollah is influential but the statement of responsibility made by IS did not cite that it was motivated by the group’s involvement beside President Assad in the Syrian war. Casualties could have been higher but a would-be third bomber was found dead on the second explosion scene with explosives intact.

Prime Minister Tammam Salam declared Friday a day of mourning after holding an urgent meeting with Speaker Nabih Berri. He stated that adequate measures will be taken after relevant consultations as the pressure for security and safety increased after the attack in a country without a president for more than 17months. It is still unclear if the different political parties in the cabinet and parliament will forgo their political differences to address the issue.

The bombing took place at the Burj al-Barajneh neighborhood and is the worst since the end of the 1990 Lebanese civil war. The attack has been condemned by world leaders and U.N Secretary General Ban Ki-Moon called for solidarity and “not to allow this despicable act to destroy the relative calm that has prevailed in the country over the past year.”

Former Prime Minister Saad Hariri labeled it a “vile and unjustified” attack while Bilal Farhat of Hezbollah said “it was a satanic terrorist attack.” The U.S government said it will reinforce its support to the Lebanese state.

Some reports have not ruled out that the attack could have been a reprisal for Hezbollah’s action in neighboring Syria where it has vowed to continue fighting.