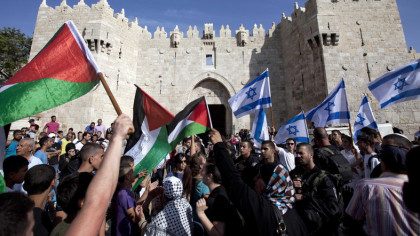 US Secretary of State John Kerry Wednesday urged Israelis to consider the two-state solution to end the historic conflict with Palestinians while saying that he knows the move will require courage.

Kerry was addressing an Israeli gathering at UN, in commemoration of the 1975 speech delivered by Israeli ambassador Chaim Herzog denouncing a UN “resolution that declared Zionism a form of racism.”

“The Zionist dream embraces the concept of Israel as a Jewish democracy, a beacon of light to all nations,” Kerry told the gathering before adding “That dream can only be upheld by two states living side by side in security.”
“We all know from years of discussion and efforts: this is not an impossible dream. It is achievable.”

He also told the gathering that he knows that recognizing Palestine as a state is a hard move which requires “courage” and “leadership.”

“Fear and bigotry can be defeated, but those are choices we now get to make. So now it’s our turn,” he said.

Kerry’s call for two-state solution comes as the Israeli Prime Minister renewed, during his visit this week to Washington, commitment to hold fresh peace talks with Palestinians.

Talks initiated by the Obama Administration collapsed last year after the rival camps traded accusations leaving the talks in a standoff.

International diplomatic efforts are being made to push the opposed camps to renew peace talks in order to end the seriously deteriorated situation prevailing between Palestinians and Israelis in the West Bank.

The UN Security Council is studying a draft resolution presented by New Zealand also proposing a two-state solution as the only way out.

Tensions between Palestinians and Israeli have escalated since September following a Palestinian protest against Israeli presence at al-Aqsa Mosque. Israeli forces clamped down on protesters, igniting a series of clashes that left at least 77 Palestinians and 10 Israelis, mostly soldiers, killed.

Analysts are fearing the outbreak of a third intifada.