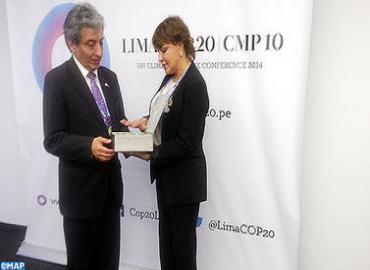 Morocco, which will host the 22nd Conference of the Parties to the UN Framework Convention on Climate Change (COP22) next year, has adopted a major green move translating its attachment to the protection of the environment.

Six years ago, the North African country banned black plastic bags. Now the Moroccan House of Representatives (Parliament) has adopted a bill banning the manufacturing and marketing of plastic bags.

This bill is viewed as an environmental revolution and a contribution made by Morocco to address global climate change challenge which is threatening not only the environment, but also to address economic and social development as well as global security and stability.

The North African country has engaged early in the fight against the negative effects of climate change, while adopting a global, inclusive and responsible approach.

The Moroccan Constitution of 2011 clearly stipulates the right to a safe environment and the need to strike a balance between the socioeconomic development requirements and environment protection.

Several western countries have also banned the use of plastic bags or charge shoppers for their use to force them to rethink about the environment impact of these bags and seek other alternatives.

Over 100 species of sea birds are known to have ingested plastics, and according to a scientific study around 95 pc of fulmar, a seabird related to albatrosses, have been found to have potentially hazardous plastics in their stomachs.

Some 4.5 billion of the plastic bags used by Europeans each year end up as litter – often in landfills or waterways such as the English Channel, where studies have shown a floating debris field of up to 100 items per square km, threatening sea mammals and birds with entanglement and ingestion.

By 2020, the number of plastic bags that end up as litter each year is projected to rise to 5.1bn. Campaigners say that more than one million plastic bags are used every minute around the world, each with an average working life of just 15 minutes.