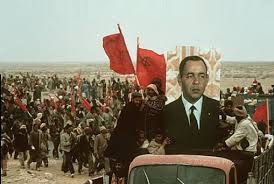 The Green March or the Moroccan Epic, a Feat of Diplomacy

There are very few events in the History of a country that transcend time and generations to remain vivid in the memory of all, old and young, there are few events that bear a historical grandeur and a sense of destiny and belonging.

Morocco did live such an event. That was the Green March, the unprecedented march, both symbolic and popular, of 350,000 Moroccans who walked hundreds of Kilometers to peacefully recover a part of their country, the Western Sahara, which was under Spanish dominion.

No shots were fired, not a single drop of blood was shed, and no tears were shed from a bereaved mother or a widow and Morocco retrieved its spoliated Sahara. That was in 1975.

The centuries-old historical, geographical, and ethnical ties that existed between the Sahara and Northern Morocco and that were broken by colonialism for decades were stitched again thanks to the genius idea of the late king Hassan II, the architect of the epic, who had thought out and planned every detail of the March.

Even the number of marchers set at 350,000, was not fortuitous but was rather symbolic. It is the number of births in Morocco in 1975, the equivalent of an entire generation of youths of a country that Hassan II himself called “the solemn harvest that God gives us to bring back to the fold of the homeland a land that we have never forgotten.”

Forty years after the launch of the Green March, Moroccans still remember this glorious epic played by some 350,000 civilian volunteers from different social strata and from all regions of the kingdom. They answered the call to march to liberate the Sahara from Spanish occupation with no weapons other than the Koran and the national flag.

These peaceful weapons heralded that the time of the Spanish presence on African soil was over as the tens of thousands of Moroccan citizens waving the flag in one hand and the Koran in the other were unknowingly creating a legend that inspired writers and film makers. A myth was born.

The Green March which astounded the world and won Morocco the admiration of both friends and foes has, as the independence had done before, remodeled the Moroccan identity and cemented bonds between all the components of the Moroccan society, with its rich and poor, its military and civilians, and most of all between the regime and the buoyant political parties that were at the time claiming deep constitutional and democratic changes.

Spain withdrew from the territory, leaving behind a bare desert with just few tiny agglomerations. The green March was over but the enthusiasm it triggered did not fade away, an enthusiasm that prompted the Government to invest billions of dollars to bring out from this desert area modern cities, equipped with state-of-the art infrastructure in economic, social, health, educational and sports sectors, and to allow the Sahrawis to lead a dignified life.

The cost was high and the sacrifice was huge. Yet, each and every component of the country supported the investments injected in the Sahara to assist the long neglected region and its population. As recalled by King Mohammed VI himself, since Morocco recovered the Sahara in 1975, “for every single dirham of revenue from the Sahara, the state invests 7 dirhams there, as part of the solidarity between the regions and between the sons and daughters of the nation.”

In addition to the economic sacrifices by all Moroccans, there was also a human sacrifice made by the Royal Armed Forces which had to fight an armed rebellion, remotely controlled by the Algerian and Libyan neighbors. But no price is high enough for national unity.

Moroccan military strategists also made history when they constructed a Defensive Wall that put an end to the incursions of the separatist rebels, armed and financed by Algeria and Libya. This wall imposed a new military reality on the ground that ended up in the signing of an UN-brokered cease-fire in 1991.

“In addition to the lives given for the Sahara, Moroccans have made other forms of sacrifice – moral and material – for the development of the southern provinces, sharing whatever they had with their brothers and sisters in the south,” the King had once said.

The sacrifices were worth it. Morocco pacified the territory and won the battle of economic development and integration as evidenced by the huge structural projects and urban achievements carried out in the Southern Provinces.

Whatever the vicissitudes and sacrifices, the Green March was an admirable feat of diplomacy. It enabled to oust a colonial power without resorting to arms. It allowed a whole region to embrace economic and social development. It allowed to establish a new geopolitical balance of power in the region.