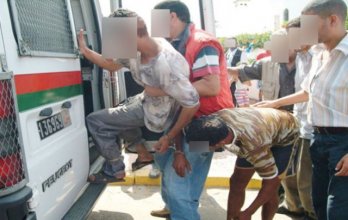 The crime rate in Morocco has dropped by more than 9% over the first nine months of 2015 compared to the same period in 2014.

The figures were disclosed by Junior Interior Minister Charki Draiss at a briefing before the parliament’s interior committee on Monday.

He said a significant decrease has been registered in crimes related to sexual assault, which dropped by 16.5%, while breaches to public decency have declined by 28% in 2015.

He hailed the efforts of security services in fighting all forms of crime, in order to ensure the security and tranquillity of citizens.

The official pointed out that Morocco has likewise beefed up its efforts in curbing the activities of human trafficking networks thanks to the mobilization of 13,000 law enforcement agents.

A recent American report on human rights revealed, however, that Morocco is still a human trafficking hub.

The Interior Ministry’s positive report on crime reduction came out at the same time as a report of the British Foreign Office which ranks Morocco among safest countries around the world.

In the 2015 map of the foreign Office released on the occasion of World Travel Market (WTM), held in London on November 2-5, Morocco is ranked among the world’s safest destinations for British tourists and emerges as the only safe country in the MENA region.

The kingdom appears among low-risk countries and ranks high alongside European and North American nations in this new map where Morocco leads the Arab world.

With the exception of Morocco, the other MENA countries are ranked among the countries not recommended by the Foreign Office.

The UK is one of the biggest suppliers of tourists in the world with nearly 60 million tourists a year.

Since 2013, Morocco became the first African destination from the UK, ranking far ahead of Egypt, Tunisia and South Africa