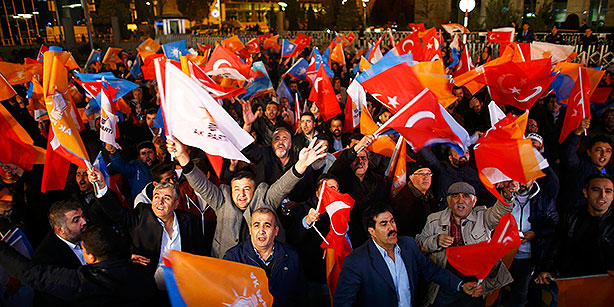 Turkey: AKP to cruise to power with single-party government 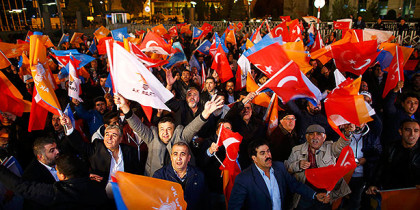 Erdogan-backed Justice and Development Party (AKP) stunned Turkish political circles as it secured Sunday a parliamentary majority in the November 1 election after it lost outright victory in the June 7 polls.

AKP succeeded in clinching nearly 49 per cent of the total votes and thus secured more than 300 seats in the 550-seat Turkish Parliament.

With these results, the AKP has leeway to form a single party-government. However this will not be enough for the party to carry out Erdogan’s highly desired constitutional amendments allowing him to grab more power in a one-man power style.

Acting Prime minister and Head of the AKP Ahmet Davutoglu stepped away from irritating statements declaring that his party’s victory was a victory of all Turkish and that there was ‘no loser.’

Erdogan on his part remained faithful to his attitude as he sent a tilt to his critics and to opposition parties.

“Our people clearly showed in the November 1 elections that they prefer action and development to controversy,” he said adding that voters had backed “unity and integrity”.

While the ruling AK sailed single-handedly to dominate the parliament some opposition parties regressed compared to their June scores.

The pro-Kurdish People’s Democratic Party, which stunned during June elections, lost around 1 million voters but succeeded in securing the 10 per cent threshold needed to remain in the parliament. The party leader Selahattin Demirtas judged the elections unfair citing the violence that occurred during the campaign. He said his party stopped its campaign after a terrorist attack hit a Kurdish-dominated demonstration.

The main loser of the election is the Nationalist Movement Party (MHP,) the second leading opposition party, which only scored 12 per cent of the vote. Analysts say supporters of the party left for the AKP.

Despite the claims of violence and fraud, the election is seen as a major victory for Erdogan who, this time, stayed behind the scene during campaign.