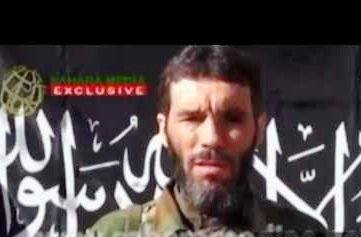 Algeria: Is Belmokhtar Dead or Still Alive? Yes… No…

No day passes without the circulation of contradictory information alleging that the most wanted Algerian terrorist, Mokhtar Belmokhtar, is still alive or that he was killed few months ago. This week, in the space of just few days, these conflicting information resurfaced again.

A top Al-Qaeda fighter said in an audio recording dating back to July and released recently that the Algerian leader of al Mourabitoune, an Al-Qaeda-affiliate armed group in West Africa, was still alive and that claims he had been killed in June in an American airstrike in Libya are mere propaganda.

Immediately afterwards, Algerian based Ennahar TV channel reported that the terrorist, Mokhtar Belmokhtar, has been killed citing the same Al-Qaeda fighter, said to be the group’s spokesman, Hassan Abderraouf.

The Algerian terrorist has been a key figure of terrorism in the Sahel and one of the most deadly attacks led by his group was the 2013 attack on the In Amenas gas plant in the Algerian Sahara desert that left 38 people dead.

Belmokhtar’s death has been reported several times over the years but no clear cut evidence ever came to confirm or rebut the allegation.

The latest claims that he had been killed in the US airstrike carried out in Libya were refuted. Chad had also claimed that he was killed in an anti-terrorism operation in Mali two years ago. The news was not verified on the ground.

In August, the Islamic State group posted photographs of Mokhtar Belmokhtar as a wanted man by the IS which describes him as an apostate.

The posting made analysts believe that if the terrorist is wanted by the IS group, this means that he is still alive.

Today, the same doubts surround al-Qaeda’s recorded audio message released during the weekend announcing the terrorist’s death without giving any hints as to the circumstances of his killing.

Born in northern Algeria, Belmokhtar travelled to Afghanistan in 1991 to join jihadists fighting against the pro-Soviet government before returning to Algeria and ending up head of the al-Qaeda branch in the region.

Announcements of his group pledging allegiance to the newly established Islamic State group was quickly refuted. Belmokthar is also notorious for his involvement in cigarettes smuggling in the Sahara Desert with his trademark one eye face after losing the left while handling explosives.

The death of the $5 million worth terrorist, as evaluated by the US for information leading to his capture, would be a big blow to the group.