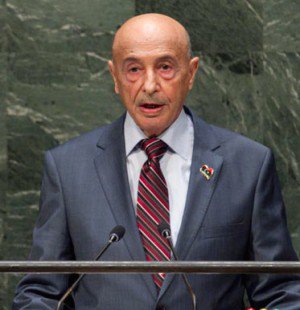 In his address, the President of the HoR questioned the stand of the United Nations in Libya’s fight against IS saying that the international community has to choose between attacking and imposing sanctions on those standing in the way of Libya’s progress or telling Libyans that they are alone in the fight.

He urged the UN to be supportive of the Libyan internationally recognized institutions and condemn those who are obstructing peace in Libya, through violence against civilians and civil institutions.

The international community had to stand with the elected legitimate authorities and implement United Nations Security Council resolution 2174 (2014) by imposing sanctions on those hindering the political process and undermining security. Not to do so would equal stating very clearly that Libyans had to face terrorism alone, he said.

Saleh reiterated the Libyan Government’s call for the removal of the UN arm embargo which, he said, seriously cripples the Libyan national army in its efforts to overcome the jihadists.

He also urged the international community to help his government regain control of Tripoli and chase out militias and armed groups controlling official institutions.

Saleh’s address came as clashes between the Libyan national army and the IS fighters have intensified in the city of Benghazi on the ninth day of an offensive launched by Gen. Haftar’s forces in a bid to regain control of the city.

Fighting continued in Benghazi’s Sabri, Hawari, Leithi and Buatni districts. The Libyan national army spokesman Colonel Mohamed Hijazi indicated to reporters that 52 jihadists had been killed in the past three days alone. Col. Hijazi also claimed that the offensive has helped the army to control much parts of the city.

Conflicting reporting put the death toll in the army’s ranks at 5 with 21 wounded and in the militants’ ranks at 7 dead over the weekend.

Haftar’s offensive referred as “Operation Doom” launched last September 19, came under fire by the UNSMIL Chief Bernardino Leon who said it sabotaged all efforts to bring the Libyan Dialogue Process to completion and that civilians’ deaths were unacceptable.

The Libyan political parties involved in the Dialogue Process are expected to return to Shkirat this week to vote the final document and appoint members of the future Libyan unity government.

North Africa Post's news desk is composed of journalists and editors, who are constantly working to provide new and accurate stories to NAP readers.
NEWER POSTMorocco to Take over chairmanship of COP
OLDER POSTIsrael-Palestine: Netanyahu tired of war?