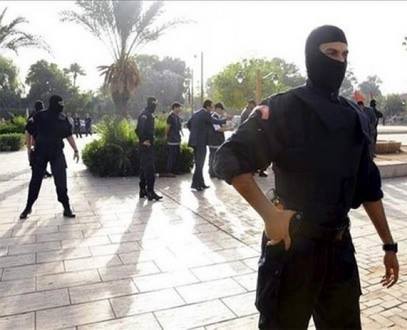 Moroccan authorities have announced the arrest during the few past days of another six members of the terror Islamic cell they dismantled September 12th, showing the Kingdom’s tireless efforts and firm determination to combat terrorism.

According to Central Bureau of Judicial Investigation (BCIJ), an FBI-like Bureau of Investigations, the criminal involvement of the newly captured six members in terror plots has been confirmed.

They were operating in various regions of the Kingdom namely Beni Mellal, Khouribga, Sidi Allal El Bahraoui and Tetouan.

The group’s name, “the Caliphate Soldiers in Morocco,” is inspired from the Algerian group of the “Caliphate Soldiers”, an al Qaeda splinter faction that had declared allegiance to ISIS last year before kidnapping and beheading a French tourist.

The captured terrorists were planning to carry out attacks in Morocco to undermine the country’s peace and stability, said the BCIJ, noting that the Islamist militants were working on a wireless bombing system via mobile phones and planning suicide-attacks against some penitentiary institutions to free convicted Isis prisoners, said the Moroccan police.

The arrest of this new terror group comes one day after the visit French President Francois Hollande paid to Morocco with the fight against terrorism featuring high on the agenda of his talks with Moroccan officials.

Last week, Moroccan police arrested other members belonging to the same radical Islamist cell which was planning to create an Islamic State affiliate. The police seized weapons and bomb-making materials in raids on their hideouts.

Hundreds of fighters from Morocco and other Maghreb states like Tunisia and Algeria have joined Islamist militant forces in Syria’s war. Some are threatening to return and create a new jihad wings in their home countries, security experts say.

Last year, Morocco launched a new security mechanism known as “Hadar”, set up to counter security threats facing the Kingdom, in most of the Kingdom’s major cities and tourist hubs.

Thanks to “Hadar,” and the newly created Central Bureau of Judicial Investigations (BCIJ), Moroccan authorities have dismantled about thirty jihadist cells since 2013 and foiled several terrorist attempts.

North Africa Post's news desk is composed of journalists and editors, who are constantly working to provide new and accurate stories to NAP readers.
NEWER POSTLibya: “This is the final text, no more modifications”, UNSMIL Chief
OLDER POSTMauritania-WB: nearly $5 million earmarked to preserve the environment