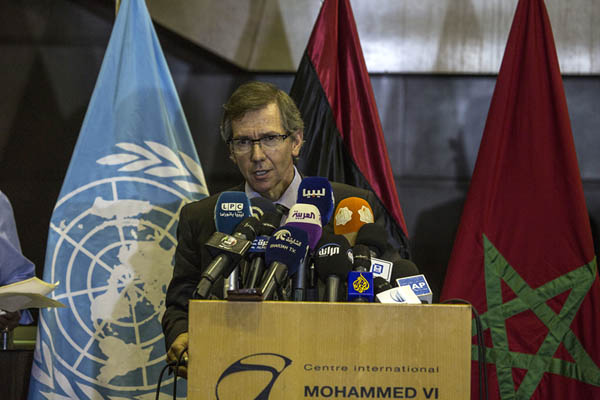 Libya: “This is the final text, no more modifications”, UNSMIL Chief 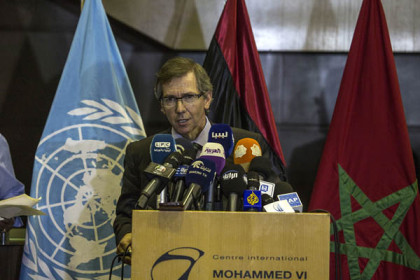 UNSMIL chief Bernardino Leon announced Monday night from SKhirat that the political dialogue was “now finished” and that it came up with a text that is “the final text,” adding that no amendment will be accepted and that the appointment of unity government is expected after Eid.

“I am coming to say tonight that we finished our work. We have now a text that is the final text. So, our part of the process is now finished. Now it is up to the parties, up to the participants in the dialogue to react to this text, but not in terms of adding more comments or getting back with something to negotiate,” Leon said.

Leon added that it is the responsibility of rival Libyans to accept or reject the final text warning that rejection of this final draft would pit Libya into a worse chaos.

“They can refuse, they can reject this proposal. But in this case they will also be choosing the uncertainty, the difficulties to work with the international community, to work with other Libyans and, of course, putting this country in a very difficult position.”

Leon continued urging all participants to consider that final text as the best for all Libyans and there always will be dissatisfactions on few elements of the text but there could not be any better solution for Libya than that final text. He also urged delegates to heed sufferings of Libyans so that they give hope for peace.

Leon expects delegates to return to Morocco after Eid holidays to discuss the composition of the future Unity government and vote the final text. The parties will also discuss the Presidential Council of government that will appear in the Annex 01 of the text.

“It has now been confirmed by all the parties in this process, without exception, all of them are ready to discuss the names of the unity government, immediately after Eid. And we all hope that this process will be expedited, that it will be possible to finish in two or three days to vote the text,” Leon said.