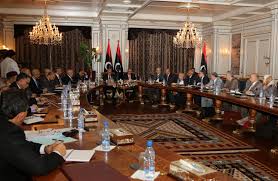 The parliament of the Libyan Islamist government in Tripoli has reportedly been attacked while in a session to discuss the draft UN-brokered text that is meant to end the war in the country with the formation of a Unity government.

The General National Congress (GNC) was attacked when its members were in session in the afternoon, it has been reported.

No group has claimed responsibility for the attack but it is believed that Tripoli’s anti-dialogue protagonists were behind it. There is yet to be an official statement from Tripoli but unconfirmed reports have stated that Salah Badi, Sami Saadi, and Abdurraouf Al-Manaie could be involved because they have been very vocal against reaching an agreement with Tobruk. Abdulgassem Gzeit, a prominent supporter of a peace agreement, is reported to have been detained by the attackers.

The GNC session was expected to review the amendments made to the peace draft during this week’s talks in Morocco and also propose names for the posts of prime minister and deputy prime minister.

There were signs that the tension in Tripoli was palpable before the attack because earlier in the day, military vehicles had surrounded the parliament and there were several road blocks in the capital. Very little information has come out of Tripoli since the attack.

Meanwhile, the Tobruk-based House of Representatives (HoR) had rejected the amendments made to the draft and recalled its delegation for consultations but only Sadiq Idris Mohamed and Saleh Huma have returned leaving behind Emhemed Shouaib, the Deputy President of HoR and head of the team and Abubakr Baera. No explanation has been given for their stay.

The U.N is urging the parties to return to the negotiation table.

North Africa Post's news desk is composed of journalists and editors, who are constantly working to provide new and accurate stories to NAP readers.
NEWER POSTTunisia-France: Paris and Tunis team up against terrorism
OLDER POSTTunisia sacks 110 security officers for ties with terrorist organizations