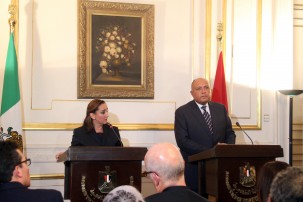 Mexico’s foreign minister Claudia Ruiz Massieu who flew to Cairo after the tragic death of 8 Mexican tourists has called for thorough, comprehensive, prompt and transparent investigations in the circumstances that led to what she termed “tragic and unprecedented events.”
The 8 Mexican tourists were killed together with 4 Egyptians and 10 others were injured by Egyptian security forces while they were taking a break in the Egyptian desert during their safari trip.
Egyptian security forces fired on the group of tourists and guides after mistaking them for terrorists they were chasing in the area, according to the Egyptian government.
The Mexican Foreign Minister who was talking to reporters after a meeting with President Sisi insisted that her country wants to know what actually happened and what led to the “tragic and unprecedented events.”
“We want to determine the circumstances that led to that unprecedented and unfortunate incident,” she said, adding that her country was awaiting the report of the investigation to determine “the responsibilities and further actions.”
In a statement released following the incident, the Egyptian presidency asked “its friends in Mexico to understand the current security circumstances Egypt is going through, especially when it comes to fighting terrorism.”
The Egyptian Foreign Minister Sameh Shoukry published an open letter in the Mexican media, wherein he deplored the incident as “regrettable.” He lamented that the tragic event is being used by some people “to allege that that Egyptian law enforcement officials have no strict rules of engagement, (or) act indiscriminately.” He assured Mexican readers that an investigation will be held on the facts that are “confusing and unclear.”
Egypt announced that the new Prime Minister will chair the investigations committee and that the investigations report will be made public.
A media ban was issued by Egypt’s prosecutor’s office on Wednesday barring all types and forms of media from reporting on the issue until the investigations are over.
Massieu will take back to Mexico the corpses of the victims as well as the injured tourists.