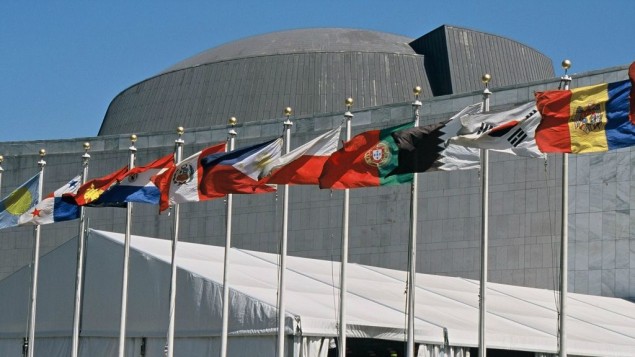 Palestine-UN: Palestinians shall hoist their flag at UN buildings 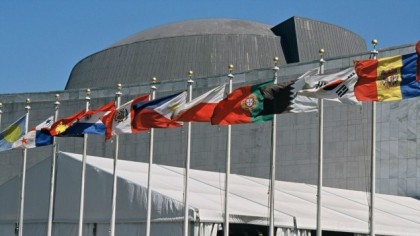 Palestinian diplomacy won a landmark victory Thursday as a large number of the UN General Assembly members voted for hoisting the Palestinian flag alongside other nations at the UN Headquarters and offices.

The UN General Assembly on Thursday decided that “the flags of non-member observer States shall be raised at the world body’s headquarters and offices alongside the flags of its 193 Member States,” a statement said.

The resolution, “Raising the flags of non-member observer States at the United Nations,” was pushed through by France, Sweden, Italy, Spain, Ireland, Slovenia, Luxembourg, Belgium and Malta and dozens of other countries and was adopted by a vote of 119 in favor to 8 against, including the U.S. and Israel, while 45 delegations abstained.

The UN has 20 days to fly the flags of non-member observer States and Palestinians are expecting this to materialize on September 30, the day President Abbas will address the world assembly.

The UN approval unleashed the Palestinians’ excitement and uplifted their confidence as to the achievement of statehood. “It’s a step towards the recognition of Palestine as a full-fledged member state of the United Nations,” Palestinian Prime Minister Rami Hamdallah said on Thursday.

France which has been pushing for new peace talks in the region has also expressed satisfaction after the vote saying that it is an important move towards peace.

We need to mobilize a new dynamic to preserve the two-state solution,” French Prime Minister Manuel Valls said in Paris.

“We have to reduce tension on the ground and restart a credible dialogue,” he added. “Without a resolution of this conflict it will be difficult to find solutions elsewhere in the region.”

As expected Israel and the US slammed the vote calling it a mistake by the UN General Assembly and claiming that Palestinians are misusing the UN to attain their goal.

“Raising the Palestinian flag outside the UN headquarters is not an alternative to negotiations [between Palestinians and Israel], and will not bring the parties closer to peace,” US Ambassador Samantha Power said after the vote.

Echoing her, Israeli UN Ambassador Ron Prosor said “no vote can turn an empty symbolic gesture into a state.”