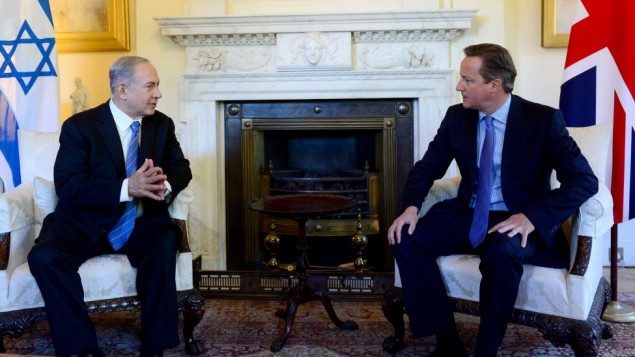 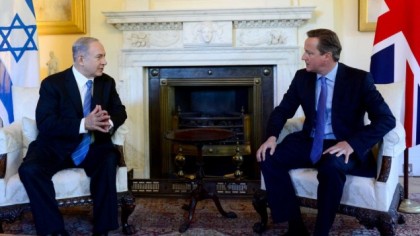 Visiting Israeli Prime Minister said in London Thursday he is ready to talk peace with the Palestinians at any moment and without pre-conditions.

On a three-day visit in the UK, Benjamin Netanyahu who met with his British counterpart David Cameron re-iterated his previous willingness to negotiate peace with Palestinians in order to ease the flaring tension in the region.

“I want to say here in 10 Downing Street, and reaffirm again, that I am ready to resume direct negotiations with the Palestinians with no conditions whatsoever to enter negotiations, and I’m willing to do so immediately,” Netanyahu said.

He later reiterated his commitment before British lawmakers saying his call for talks is not bound to any precondition.

“I’m willing to go to Ramallah, yes, a nightmare for my security people. I often do that when I stop at falafel stands. They’re going to have to deal with it. Okay? Or President Abbas can come to Jerusalem, or for God’s sake, we can take up some of these suggestions for retreats in Sicily or fjords in Norway. Whatever. Anytime, anywhere, now, without preconditions,” he said.

Aside from the call for the resumption of peace talks between Israel and Palestine, Netanyahu expressed Israel’s readiness to join in the fight against extremism in MENA region which is troubled because of the Islamic State actions and the influence of Iran that he called “the enemy.”

“The Middle East is disintegrating under the twin forces of militant Islam: the militant Sunnis led by ISIS and the militant Shiites led by Iran,” Netanyahu warned Cameron.

“I believe that we can cooperate in practical ways to roll back the tide of militant Islam both in the Middle East and in Africa altogether.”

Meanwhile Netanyahu’s visit was met with protest as union leaders, far-leftist activist and three lawmakers called on Downing Street to cancel the visit and impose sanctions on Israel.

On Wednesday hundreds of anti-Netanyahu activists took to the streets to protest the visit calling on the British government to arrest him over the death of 2,000 Palestinians during the 50-day war between Israel and Hamas in Gaza in 2014.

A petition on the UK’s Parliament website calling for his arrest was backed by over 100,000 signatories.

The British government reacted to the petition saying that Israel has the right to defend itself against Hamas militants and that that under the British law Netanyahu could not be arrested.