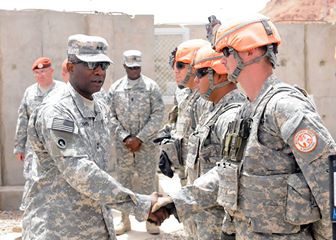 Egypt: U.S to increase forces in the Sinai

The Pentagon will increase the number of its troops present in the Sinai peninsula under the Multinational Force of Observers (MOF) to more than 700 with “adequate force protection.”

The decision was made after four U.S soldiers were injured by an improvised explosive device on September 3.

The rising threat posed by armed militias and extremist groups linked to the Islamic State were cited as the reasons behind the decision.

Announcing the decision on Thursday, U.S Defense Department spokesman Peter Cook said 75 troops will head to Sinai to “increase the safety and security of U.S forces.” Adjustments to the force and logistics will be made according to developments, he said.

MOF is in Sinai as a peacekeeping force upholding the 1979 Egypt-Israeli peace treaty but it has been caught up in the fight between Egyptian security forces and the armed groups operating in the Sinai.

Clashes in the region have been intense this week and the Egyptian military spokesman Mohammed Samir claimed that at least 134 militants have been killed from Monday through Thursday in anti-terrorism operations in the Northern Sinai towns of Rafah, Sheikh Zuweid and Arish.

Cook said they are closely monitoring the situation in the Sinai and MFO continues to be committed to its duties. He didn’t rule out the possibility of a change of policy saying that the “primary concern right now” is providing protection to MFO personnel. He said Pentagon is not ready to “disclose all the security precautions that are being taken for understandable reasons.” MFO’s number is now expected to reach around 725 with the increment and its light arms might soon be replaced by heavy artillery.