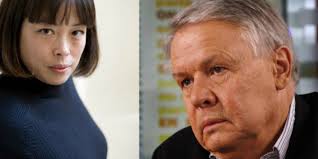 Each day brings a new twist in what has become known as the Eric Laurent-Catherine Graciet case while condemnations, especially on the part of French and Moroccan media, are still pouring down on the two French journalists who are standing before court for attempted blackmail and extortion against the King of Morocco.

Besides the reporters or media outlets that have individually criticized the two blackmailers for their unethical behavior, several institutions like the Moroccan publishers’ association, the Moroccan Journalists’ Union (SNPM) or the Observatory on Ethics in Media “L’Observatoire de la déontologie de l’information” (ODI) have also fustigated the two French journalists.

Eric Laurent and Catherine Graciet had been indicted end of August by a Paris investigating judge for attempted blackmail and extortion against the King of Morocco Mohammed VI.

The two journalists had threatened to publish a polemical book on Morocco, unless they get €3 million. The two journalists had been arrested by French police in Paris right after their third meeting with the attorney representing Morocco. During this ultimate meeting, they were videotaped and audio-recorded accepting to reduce the amount they initially requested to €2 million, signing a statement pledging they will not publish the famous book they co-authored and pocketing an advance of €80,000, €40,000 each.

In a statement released last week, ODI, a French association of journalists, media organizations and representatives of the public sector pointed out that “information is not exchangeable for cash.” “A journalist worthy of the name cannot pay to get information nor pay an informant (…) and cannot get paid by a source or an interested third party to publish, withhold, or delete information.”

The value of information is determined by the public’s interest to know it, not by the interest of a reporter or a source seeking to take advantage of that information, stated the association, which has among its members Agency France Press (AFP) France Télévisions and Le Monde.

Despite the blatant proofs indicting the two felons who were caught red-handed, their defense is now trying to annul two of the three conversations recordings where the two blackmailers were bargaining their price if Morocco does not want the book to be published.

According to French media, the two journalists’ lawyers have filed pleas to annul two recordings claiming a violation of the French criminal law and direct interference of the judiciary in the making of the evidence presented by Morocco’s attorney.

The defense lawyers are trying to find loopholes, but they know that the recordings are not the only evidence of their clients’ involvement in blackmail and extortion.

There is the statement, reportedly handwritten by Catherine Graciet, whereby the two journalists commit not to write, comment or publish anything on Morocco, and to never disclose the documents and information in their possession. And more than that, Eric Laurent and Catherine Graciet had each €40,000 in their pockets when caught by the police.

The case is not over yet. The ongoing court battle has just started and the trial promises to be closely followed both in France and in Morocco.