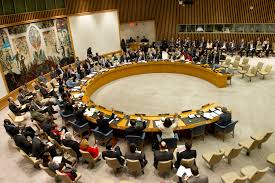 The United Nations Security Council will hold September 30 a debate on the conflicts threatening peace and stability in the Middle East and North Africa.

The debate is organized by Russia which took over Tuesday the monthly UN Security Council rotating presidency.

According to Russian envoy to the UN Vitaly Churkin, the debate, to be chaired by Russia’s foreign minister Sergei Lavrov, will look into ways of solving the Libyan crisis and its spell-over to neighboring regions, the Israeli-Palestinian conflict, the situation in Syria and the fight against terrorism particularly the Islamic State.

Moscow says it is deeply concerned over the growing threat posed by the Islamic State (IS) terrorist organization in Syria, Iraq and whole MENA region.

But the Kremlin wants at the same time to enhance further its standing and influence in the region by fostering economic and military cooperation with Arab countries.

According to some analysts, Moscow’s new foreign policy seeking to strengthen its presence in the Middle-East and North Africa comes as a response to US move to build a missile defense system in Eastern Europe and the West backing of Ukraine.

Russian President Vladimir Putin has successfully positioned Russia as an indispensable player to resolving key international issues such as the Syrian conflict and Iranian nuclear program.

The Moscow-brokered deal to put Syria’s chemical arsenal under control of international inspectors helped avoid military strikes against the Syrian regime. The Kremlin is still helping the army of President Bachar Al-Assad resist bloody attacks of opposition and Islamic militants.

Russia also emerged as a strong voice in the P5+1 group nuclear talks with Iran, helping to convince Teheran to sign the historic nuclear deal reached last July in Vienna after two years of negotiations.

Furthermore, Moscow has grown increasingly assertive in the Middle East peace process since it joined the Quartet and is clearly coming back to many African regions it lost in the 90s. But this Russian comeback is irking Washington.