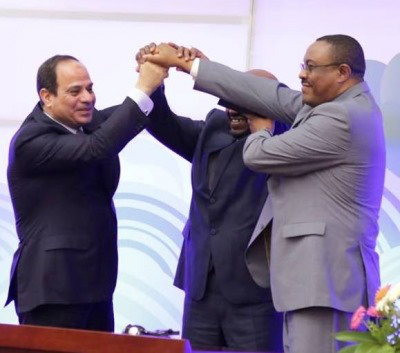 Egypt has called for urgent consultations with Ethiopia and Sudan over the construction of the Grand Ethiopian Renaissance Dam (GERD) after the consultancy firms contracted to submit a report on the impact of the dam on the Nile failed its deadline twice.

Cairo has always stressed that the dam will affect the livelihood of its people and agriculture but Ethiopia has tried to play down such claims.

For decades, Egypt has annually been receiving 55 billion cubic meters of the Nile River’s water, the largest share, as per agreements concluded during the era of colonialism and the government has stated that a water recycling project is helping to provide the country’s water deficit of 20 billion cubic meters.

Water Minister Hossam Moghazi told state news agency MENA that the revival of the tripartite talks was necessary because of Egypt’s “discomfort” over lack of agreement awaiting the technical impact of the dam that the consultancy firms were expected to clarify.

He said Cairo continues to be committed to the Declaration of principles regarding the dam that was signed on 23 March 2015 in Sudan even though the government doesn’t consider it as an approval for the construction of the dam.

The construction of the dam on the Blue Nile started in 2014 and it is expected to be completed in 2017 with a storage capacity of 74 billion cubic meters raising Egyptian fears that it will affect its share of the river water.

France’s BRL and Dutch group Deltares were supposed to submit their studies of the dam’s impact on 5 September but Minister Moghazi said they are yet to receive a report. The firms had benefitted from an extension of the deadline in August when they failed to complete their work.