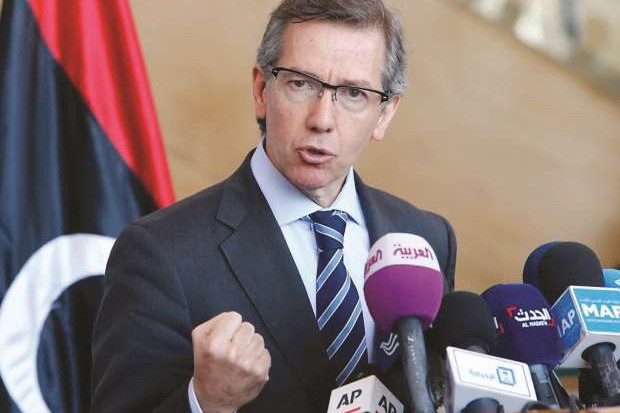 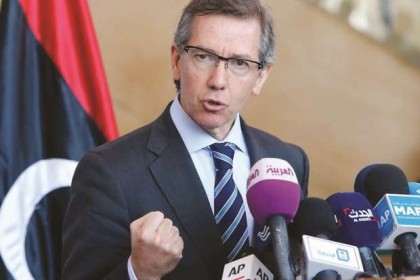 Libya’s internationally recognised Parliament Tuesday sent a list of its nominees for the post of Prime Minister and Deputy Prime Minister in the future Government of National Accord to UNMIL Chief Bernardino Leon.

The House of Representatives (HoR) of the internationally recognised government operating from Tobruk finally sent its list of 12 nominees to the position of Prime Minister and his HoR-member deputy to Bernardino Leon, the UN envoy supervising the Libyan Dialogue.

The 12 nominees have been selected from Libya’s historic provinces namely Tripolitania, Cyrenaica and Fezzan. Each of the provinces making up the HoR separately chose its four nominees.

The Prime Minister and his HoR-member deputy will be announced at the signing of the Government of National Accord agreement expected mid-September. Leon indicated during previous rounds of talks that the Prime Minister of the coming unity government and one his two deputies will emanate from the HoR and the other deputy from the General National Congress (GNC).

Meanwhile, reports from Greece indicated that a Bolivia-registered cargo called Haddad 1 was heading to Mistrata, Libya, with a cargo of weapons when it was arrested by Greek coast-guards Tuesday. The cargo had set out from Iskenderun, Turkey.

According to the Greek coast-guard, the six-member crew did not have the proper documentation for the weaponry.

The shipment is a violation of the UN arm embargo imposed on Libya since 2011. Libya internationally recognised government has been drumming for the lifting of the embargo so that it can equip its army properly and enable it to crush IS militants who have conquered vast territories of Libya, threatening both the HoR and the GNC after it seized Sirte.

The Libyan Prime Minister and foreign Minister last week called for arms supplies saying it is vital to defeat IS.

Plus efforts to convince the GNC to return to talks are still ongoing. Leon was Tuesday in Istanbul to seduce the GNC to take part in the coming decisive Libyan talks. However reports say the meeting did not live up to the UNMIL Chief’s expectations. GNC now apparently backed by Ankara is still adamant for changes to the July initialled Draft as condition for its participation in the talks.

Abubakr Baera, high profile HoR member from Benghazi, very strongly federalist. He chaired the first session of the HoR. He later replaced Ageela Saleh Gwaider as President of the HoR.
Fathi Al-Majbri, Education Minister in Abdullah Al Thinni’s government; also from Benghazi, although originally from Jalu.
Mohamed Al-Minifi, from Benghazi, he was ambassador to Jordan during Qaddafi period but supported of the revolution at the beginning. Represented the Transitional National Council (NTC) in Amman. From
Jadallah Azuz Al-Talhi, experienced politician, he was became Prime Minister for two terms during the People’s Committee from General Secretary of the People’s Committee in Libya 2 March 02, 1979 to February 16, 1984 and then from September 1986 to March 01, 1987. He then became Libyan foreign minister, until 1990. After occupying other major positions, he was appointed Libya’s UN ambassador. He studied in Belgium and translated several books from French into Arabic.

Otman Basir, a professor of electrical and computer engineering at Canada’s University of Waterloo. He is said to have strong backing among some HoR members beyond Tripolitania. From Qasr Ben Gashir in Tripoli.
Dow Budawia, a prominent member of the Warshefana tribe, former deputy Secretary General of the National Forcees Alliance. Reports say he was a revolutionary committee member during the Qaddafi era.
Aref Nayed, brought up in Tripoli, he was Libyan ambassador to the UAE and played a significant role in the 2011 revolution, ensuring international recognition for the National Transitional Council. He is member of the Warfalla tribe.
Abdulsalam Abdaljalil, from Sirte and a member of Khalifa Hafter’s tribe. He is unknown but supported by Cyrenaica HoR members.
Fezzan

Abdulrahman Shalgam. He is from Sebha and served as Foreign minister under Qaddafi from 2000 to 2009. He later became Libya permanent envoy to the UN, but supported the revolution. He was then reappointed Libyan ambassador to the UN by the NTC. He later resigned in 2013.
Mustafa Al-Huni was deputy chairman of the NTC, with responsibility for economy, finance and oil.
Nabil Al-Ghadamsi. Young local activist enjoying support from Fezzani HoR members.
Mohamed Ibaid. Another southern activist. Lives in Cairo and works with pro-Dignity media.