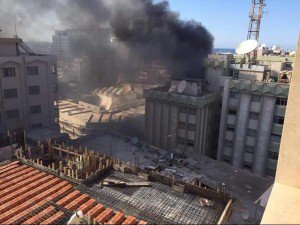 Witnesses of the incident told reporters two cars exploded no far from the offices of Mellitah Oil and Gas, a joint corporation belonging to the Italian giant Eni and the Libyan government. The area is also a high brow of Tripoli housing many foreign missions including the Saudi embassy.

Reports of casualties are unclear and conflicting as authorities have arrested reporters who rushed to the scene to take pictures.

However a police officer who arrived on the scene indicated that one person was wounded in the explosion. Other reports from witnesses also indicated that the explosion damaged surrounding buildings, smashed doors and left shards of windows on the ground.

Amidst the confusing reports, IS posted a twit on Monday evening claiming responsibility of the attack.

Tripoli is controlled by Libya Dawn militia-back government opposed to the internationally recognised government operating from Tobruk. The government had been driven out of Tripoli last year.

Both rival governments have drawn Libya into further chaos since the fall of Muammar Gaddafi in 2011. The fighting over oil fields and resources have deepened the crisis allowing Islamic organisations including IS and other outlawed groups to find foothold in oil rich Libya.