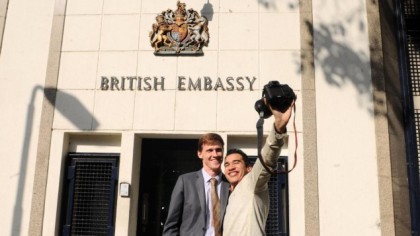 Egyptian foreign ministry summoned the British ambassador to Egypt and criticized the international barrage over court ruling on the Al Jazeera journalists accused of “false information”.

The British ambassador John Casson was summoned Sunday by the Foreign Ministry after he described on Saturday the court ruling handing three year prison sentence to three Al-Jazeera journalists as shocking.

He had said in Arabic that he was shocked by the ruling and referred to the case as of “profound interest to Egyptians because it has become a symbol of the basis for stability in the new Egypt.”

“I am concerned that today’s ruling will undermine confidence in the basis of Egypt’s stability, both in Egypt and abroad,” he said.

The ministry issued a statement condemning Casson’s comments as “incompatible with the diplomatic norms and practices of an authorized ambassador in a foreign country.”

The foreign ministry also rejected international condemnations of the court ruling saying they were an inference in the country’s judiciary system.

“The ongoing attempts (…) to allude that there is restriction on freedom of the press are mere allegations that contradict with reality; there are thousands of Egyptian journalists and non-Egyptians working in Egypt freely,” Egyptian Foreign Ministry spokesperson Ahmed Abu Zeid said Sunday in the statement.

“The defendants in the case of ‘Marriott cell’ (the name is used in Arabic media as they were arrested in Marriott hotel in 2013) committed specific and documented violations of the law.”

UK, US, Australia, the Netherlands along with international human rights groups and journalists groupings have expressed their concerns as they argued that the verdict was unfair and politically motivated.

Canadian Mohammed Fahmy, Australian Peter Greste (in absentia) and Egyptian Baher Mohammed were handed three year-jail sentence by a Cairo court on Saturday after Authorities accused them of disseminating “false news” in 2013 during the removal of President Mohamed Morsi by the army. They were previously sentenced in 2014 to between seven and 10 years in prison. However an appeal court nullified the decision in January due to lack of evidences and reopened the case.