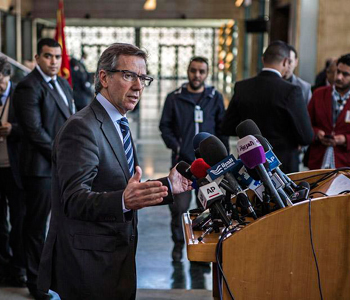 Libya: Stakeholders in the Libyan Dialogue invited in Geneva to continue talks to blow up final hurdles

UNMIL Chief Envoy for Libya Bernardino Leon invited the Libyan political protagonists to continue the talks in the Swiss city of Geneva where the General National Congress team will be present.

The Libyan Dialogue process will get back to Geneva after Leon pushed further to September 20 the new deadline for Libyans to clinch a final accord for a unified government.

Though the GNC team did not make the trip to Morocco on grounds that it was reorganising its team following the resignation of two of its prominent members, Leon sounded optimistic and greeted the participants for their understanding.

Leon said during a press conference that the commitment showed by the various delegates is conducive to future sessions, indicating also the work could be done in the coming two weeks.

He also hailed the Skhirat meeting as he argued that some progress has been made, referring to the mechanism for discussing names for the prime minister, which would be on next week’s agenda, and on two of the annexes, nos. 2 and 4, on priorities of the Government of National Accord and financial stability guidelines.

“We have now two texts which are practically final,” he said.

“All that was needed was some input on them from the GNC,” Leon added.

Leon has pushed back the end-of-August deadline for an agreement to September 20 to allow all aspects of the Dialogue to be addressed and allow the GNC to make contributions.

Reports say the new date, September 20, indicates that the agreement could be announced at the UN General Assembly slated for mid-September.

Analysts also say the announcement of the Government of National Accord and a change to the Constitutional Declaration could be also made around October 20, answering therefore the riddling question related to the mandate of the House of Representative (HoR) which expires on October 21.