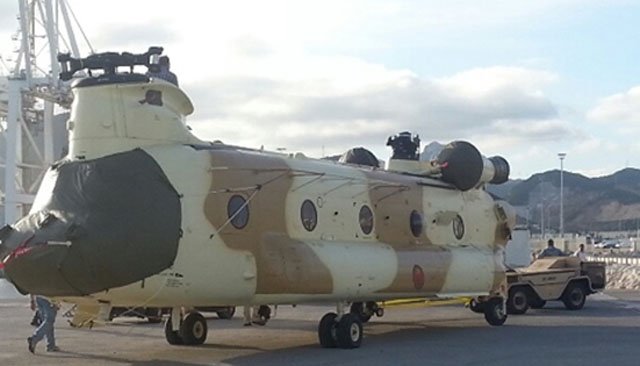 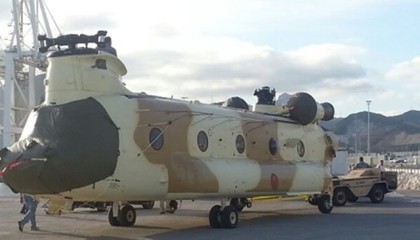 The Chinook aircrafts arrived at the port of Tanger-Med, Tangier, aboard the US registered cargo vessel MV Liberty Pride.

The delivery of the three CH-47 helicopters is part of a foreign military sales case facilitated by the Security Assistance Command (USASAC.)

The deal which includes in addition to the aircrafts, training for Moroccan crews and delivery of tools and a stock of spare-parts is estimated at $85 million.

The $6 million overhaul contract involved complete interior and exterior refurbishment, airframe touch-ups and engine overhauls. The work was done by US maintenance, repair and overhaul (MRO) company Columbia Helicopters at its facility located at the Aurora State Airport in the State of Oregon.

“The helicopters were requested for humanitarian services but can be used as transport vehicles, if needed. The fleet delivery will provide modernized vehicles to replace existing equipment which has become outdated,” the USASAC Public Affairs directorate said.

A CH-47 Chinook helicopter can carry up to 55 soldiers and one ton of materials. These aircrafts are appropriate for fight against fire and for rescue operations at sea.

Scott Huther, division chief of AFRICOM regional operations at USASAC, said “providing these helicopters will enable Morocco to use them for a variety of purposes and have interoperability with the U.S. military and its equipment in future missions.”

Morocco possesses already a number of Chinook aircrafts and other aircrafts including Sylorsky, Black Hawks, Agusta, Gazelle and Puma.

Morocco spent around $4 billion for its defense budget in 2014, a very small amount when compared to Algeria’s defense budget which was estimated at $12 billion the same year.

Morocco is also in talks with Russia to acquire a number of sub-marines.

Morocco is a staunch ally and one of the biggest recipients of US military aid in North Africa. The Royal Moroccan Air Force regularly conducts annual training exercises with the US Air Force.