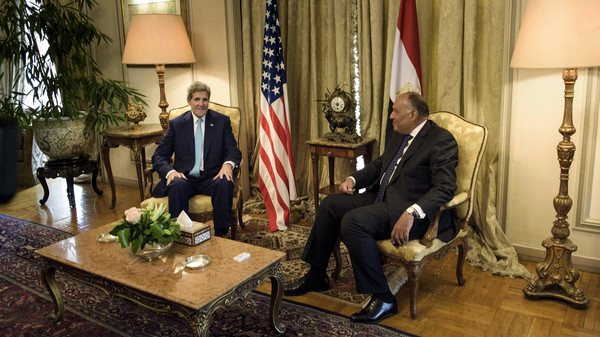 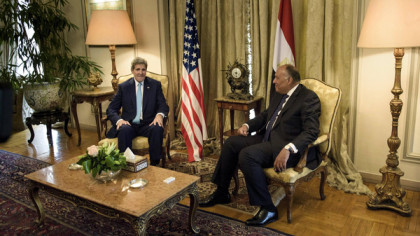 US Secretary Of State John Kerry announced Sunday in Cairo the normalization of relation with Cairo despite a long spell of confusion following the overthrow of first democratically elected President Mohamed Morsi and the poor human right record of al-Sisi regime.

At a joint press conference with his Egyptian counterpart Sameh Shukri, Secretary of State Kerry said the US and Egypt are moving back to a stronger base of relationship.

“We have significantly increased military cooperation as seen from the delivery of the F-16s, other equipment and goods which are very essential in the fight against terrorism,” Kerry said.

The US had frozen its military aid to Egypt after Morsi’s overthrew in 2013. Washington lifted the ban in March this year and has just delivered 8 F-16 fighters to the Egyptian army last week. 4 other aircrafts are due to be delivered later this year.

The US state department indicated that Washington is conscious of the growing IS threat looming on the stability of Egypt and is keen to come to its help.

“One of the key decision points of why we decided to move forward was our estimate that the Egyptians were facing a very serious threat from ISIL-affiliated organizations in the Sinai and that we needed to help them,” a State Department official said ahead of Kerry’s visit.

Tensions between the US and Egypt have also scaled up over the rampant abuse of human rights and crackdown on journalists. Washington has been very critical of Cairo for hasty trials of members of Muslim Brotherhood, with several of leaders including Morsi handed death sentences.

“There has been a little bit of tensions here and there over certain issues. The US has expressed concerns about some of the challenges of human rights protection,” Kerry said.

Kerry and Shukri both agreed on the importance of the upcoming parliamentary elections and wished they will be “fair, free and transparent”. Shukri announced the election will take place early fall.

John Kerry also indicated that the US is determined to support Egyptian economy and security because a stable Egypt is important for the stability of the entire region.

“The American people are committed to the security and economic well-being of the Egyptian people,” Kerry said.

Latest economic figures between Egypt and US have grown despite frown relations and the number of US tourism has been steady.