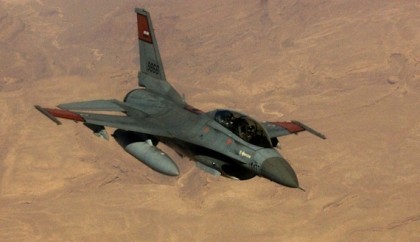 The US embassy in Cairo announced Thursday Washington has started delivery of 8 F-16 jet fighters to Egypt as a first batch of aircrafts and military assistance since the resumption of military cooperation between Cairo and Washington.

The eight aircrafts are due to arrive in Egypt this Friday coming directly from the US. Four more aircrafts are expected to be delivered later this year.

“The eight F-16 Block 52 jets are being flown in directly from the United States, and will be immediately integrated into the Egyptian air force, joining its existing fleet of F-16 aircraft,” the embassy said.

US embassy senior defense official Major General Charles Hooper told reporters that the F-16s provide a valuable capability that is needed during these times of regional instability.

The US embassy statement also indicated that Washington will continue providing follow-on support, maintenance and training for Egyptian pilots and ground crews.

The US suspended its annual military assistance of $1.3 billion to Egypt after the Islamist President Mohamed Morsi was overthrown in a military-led coup in July 2013.

Egypt has been facing growing militancy activities, primarily in North Sinai, since the overthrow of Mohamed Morsi. A militant group in North Sinai has pledged loyalty to the IS. Recent fights between the militant group and the Egyptian army in Sinai left scores of soldiers killed and thousands of Jihadists killed or captured by the army.

Egyptian President Abdel-Fattah al-Sissi has vowed to combat militancy, especially after Egypt’s top Prosecutor has been killed in a car bomb attack in Cairo. The Italian Consulate was also rocked by a car bomb attack which killed one passer-by and demolished part of the building, while a security officer at the Niger embassy was killed by gunmen. IS radical group is held responsible for the attacks.

Meanwhile the US Top diplomat, Secretary of State John Kerry is expected in the Egyptian capital on Sunday to lead the American delegation to the U.S.-Egypt Strategic Dialogue.

According to the State department, Senior Advisor to the Secretary of State David Thorne, and Assistant Secretary of State for Economic and Business Affairs, Charles H. Rivkin will also travel to Cairo to co-chair the economic track of the Dialogue, while Special Representative for Commercial and Business Affairs Scott Nathan will lead the sessions focusing on commercial issues.

Newer PostMarrakech to Host First Chinese-African Business Entrepreneurs Summit
Older PostRiyadh, Cairo to increase their cooperation and deepen their foothold in the region