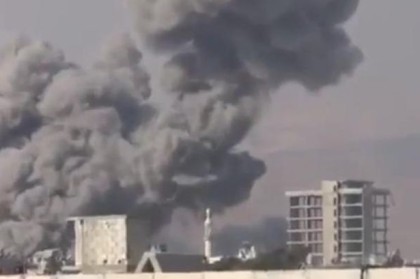 Face to face confrontations between the Turkish army and militants of the Islamic State took place on Thursday along the Syrian border when a pickup truck with 10 heavily armed ISIS members opened fire on Turkish troops stationed at a mountain border outpost.

A cross-border firefight followed and a Turkish soldier is reported to have been killed with two others injured before the car was destroyed with tank fire.

Turkey also responded to the attack by targeting militant positions across the border and scrambling its warplanes across the Syrian border.

There are also emerging reports that Ankara has given the green light to the U.S-led airstrike campaign to use the U.S. air base at Incirlik to launch strikes against IS.

The approval came after a telephone discussion between President Erdogan and President Obama with White House spokesman Josh Earnest saying that the two have agreed to“deepen” cooperation against the extremist group.

He declined to comment on speculations surrounding the use of Incirlik saying “I’m not able to talk about some of those issues because of specific operations security concerns.”

However, U.S defense officials under the condition of anonymity on Thursday claimed that Turkey allowed the use of the airbase to launch airstrikes.

Ankara’s decision must have been heavily influenced by the Monday bomb attack on Suruc which killed 32 people.

Turkey has so far been reluctant to participate in the U.S-led airstrike campaign or to allow the use of the Incirlik base to launch strikes against IS.

Incirlik is a major base used by both U.S. and Turkish forces. Its closeness to Syria and Iraq will be significant in the airstrike campaign as warplanes were so far mainly taking off from the Gulf.

The decision however could mean that Turkey will have to face more attacks from IS.

Newer PostAbout Forty African Migrants Drowned Off Libyan Coast
Older PostAfrica has the potential to be the next center of global economic growth, President Obama