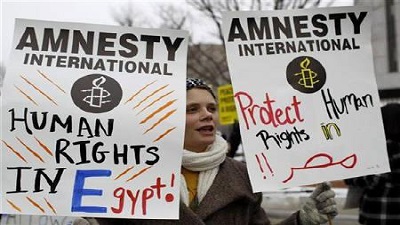 Amnesty International has decried Egyptian new anti-terrorism law which threatens journalists with jail for reporting anything that contradicts the official account of terrorist attacks.

This draft law represents “a flagrant attack on the rights to freedom of expression, peaceful assembly and association”, said Amnesty International on Wednesday in a press release, describing the bill as a “strike at the very heart of basic freedoms and human rights principles”.

The controversial law, which sparked a backlash from Egyptian media, was introduced after the killing of the Public Prosecutor on 29 June and the wave of deadly attacks against the security forces in the North Sinai Peninsula which claimed the lives of at least 17 members of the security forces.

“The draconian new measures would effectively place a gag order on journalists attempting to independently report facts as they perceive them. It is a plain effort by the authorities to blackmail and intimidate journalists who challenge the official narrative,” said Mr. Said Boumedouha, Deputy Director of the Middle East and North Africa Program at Amnesty International.

The law imposes severe restrictions on journalists reporting on terrorist attacks, quoting details or statistics that differ from those announced by the government. Those who do so could face at least two years in prison. The draft law will effectively ban journalists from collecting information from different sources, including eye witnesses and families, to challenge the authorities’ version.

After heavy criticism, the Egyptian cabinet agreed to remove the jail provision under article 33, but replaced it with heavy fines (ranging from $25000 to $64000).

According to the Egyptian Journalists Syndicate, the move just created “another type of imprisonment” as the excessive fines proposed are far beyond the means of most journalists.

The union also denounced the “totalitarian logic of the law, which aims to silence all opposition voices within the country.”  At least 18 journalists are already in detention on charges that include “broadcasting false information”, which is not a recognized under international law.

Egyptian authorities are accused by human rights groups of committing widespread violations since the army ousted Islamist President Mohamed Mursi in 2013 after mass protests against his rule.

The government denies these accusations and says it is protecting the country from Islamists, including Morsi’s Muslim Brotherhood and Islamic State.