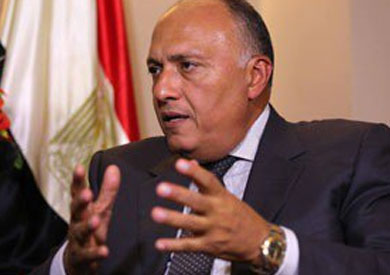 Egyptian foreign minister Sameh Shukri has questioned, during a joint press conference with visiting Italian peer Paolo Gentiloni, the practices and political actions of several countries that continue to maintain ties with terror groups as he renewed Cairo’s position in the fight against terrorism.

Egypt is unpleased with the coverage some media groups are giving to groups that it considers terrorist groups and Minister Shukri pointed out the Washington Post as an example. The U.S. daily had published a story about Al-Nusra Front of Syria that serves as al-Qaeda’s branch in the country.

“We do not understand the position of certain capitals and important political centers, which maintain contacts with a number of organizations,” said Shukri as he considered this as“contradictions” because, he said, governments prefer to consider terror groups as “extremist moderates” in order to communicate with them. He lamented that “such contacts fuel the desire of these organizations to continue their terrorism as they feel they are getting international recognition.”

The Egyptian minister didn’t name the countries that he was referring to but made it clear that Cairo is against encouraging terrorism. Egypt is struggling against militant groups, especially in the Sinai where security forces were targeted by several bomb attacks.

The Italian Foreign Minister visited Egypt after a bomb attack on the Italian consulate on Saturday destroyed some parts of the building with one street vendor dead. Italy sees the attack claimed by the Islamic state as a “failed attempt” and asserts that it will not affect the good ties between the two countries. Gentiloni met with President Sisi and Foreign Minister Shukri during his visit.