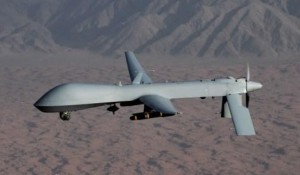 Washington Looking for Drones Base in North Africa

The United States is holding talks with North African countries to set up drones base to monitor the Islamic State in Libya wherein the terror group is expanding its influence and operations, the Wall Street Journal reported on Sunday, citing US administration officials.

Installing such a North African base near Isis strongholds in Libya would help American and Western spy agencies to “fill gaps of what’s going on there”, said a US senior official.

According to WSJ, operating drone flights from North-Africa would provide the U.S. military and spy agencies with real time intelligence on Islamic State activities in Libya which is hosting terror training camps, threatening neighbouring countries peace and stability.

U.S. officials acknowledge they have little intelligence on Isis activities in Libya because existing bases are located too far away to allow for more persistent surveillance. The long distances that drones have to travel limit how much time they can spend observing militants in Libya.

So far, no North African country has agreed to offer access to a base, according to senior U.S. officials. They said that Northern African governments are fighting Islamic militants but are reluctant to host an American military base because of concerns over backlash and increased attacks by the extremist group.

According to the Wall Street Journal, U.S. administration officials declined to unveil the name of the countries that could host U.S. drones in the region, citing high risks of reprisals.

Yet, the US newspaper said Tunisia and Egypt both share borders with Libya and have long-standing intelligence and military ties with the U.S.

The Algerians discard such possibility due to constitutional sovereignty issues. Morocco has close ties with Washington but its distance from Libya makes such a base of limited use, stressed the WSJ.

The White House recently named Tunisia a major non-NATO ally, a status which allows Pentagon to increase military cooperation with the North African country. But the U.S. insists that such a designation has nothing to do with its quest for a drone base in North Africa.

The Obama administration has also recently lifted restrictions on the transfer of military equipment to Egypt, including F-16s but US officials said the decision was not related to U.S. drone base in the region.