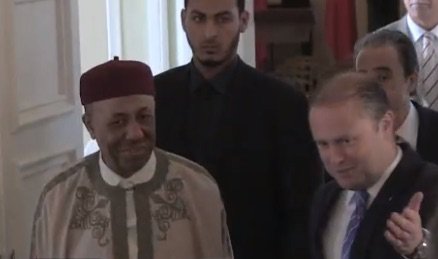 Libya: PM Thinni confident for accord between rival Libyan factions 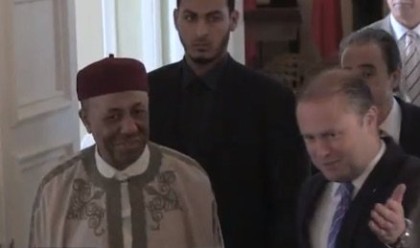 Libya internationally recognized Prime Minister Abdullah Thinni sounded optimistic for a final agreement between the Libyan rival factions which have resumed talks in Morocco to agree on the peace accord draft proposed by the UN envoy, Bernardino Leon.

The UNSMIL Draft V peace accord which was initially criticized by Prime Minister Thinni’s side is the UN document that will enable the opposed Libyan sides to reach a peace deal and end four years of rivalry that followed the overthrow of Col. Muhammar Gaddafi.

Prime Minister Thinni who was visiting Malta told journalists in a joint press conference with Maltese Prime Minister Joseph Muscat on Wednesday he hoped that delegates in the talks in the Morocco town of Skhirat would reach a power-sharing peace agreement on Thursday.

“It goes without saying that there will be a lot of discussions tomorrow and there are people in favor and others against. We aspire to realize this agreement,” Thinni said.

The talks which resumed last Friday hinted good mood and progress. All sides sat at the same table to work on the last arrangements after the parliament in Tobruk demanded amendments to be made to the final document.

UN envoy Bernardino Leon this week expressed his hope to see both sides coming together and accepting the final document.

The U.N. proposal calls for a year-long government of national accord in which a council of ministers headed by a prime minister and two deputies would have executive authority.

Thinni told reporters that the fight against terrorism, ISIS will be more efficient once the unity government was set up. He said despite differences the two rival governments have a common enemy, ISIS.

“Any sane government would fight terror, and we have been fighting this for some time. This is a paramount importance for the safety and stability of Libya and the rest of the world. This is a fight we all must fight together,” he said.

As Libyan rivals meet up to reach an agreement, the international community, world powers are throwing their support behind UN efforts.

France, Germany, Italy, Spain, the UK and the United States pressed negotiators to reach an early deal. They said they backed UNSMIL chief Bernardino Leon and pledged “significant humanitarian, economic and security assistance to a united Libya as soon as the new government is agreed upon”.

“We stand ready to support the implementation of this agreement,” they said.

EU leaders have been pushing Libyans to reach a deal in order to end open-ended conflict that has turned Libya into basket case, militias ruling lawlessly. The country has also become jump-off point for thousands of migrants trying to cross the Mediterranean.

UN agencies said on Wednesday that the number of illegal migrants has reached this year 137,000 people mostly coming from Africa and the Middle East in search for better life conditions.

North Africa Post's news desk is composed of journalists and editors, who are constantly working to provide new and accurate stories to NAP readers.
NEWER POSTEgypt: No place for terrorism in Egypt, the government takes a strong stance by adopting new law
OLDER POSTEgypt: Jihadists Escalate Attacks against Army in Sinai