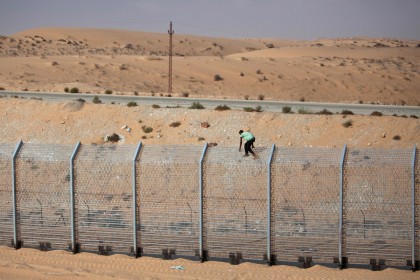 Israel will build a security fence along its border with Jordan to stop illegal migrant workers and terrorist operatives from sneaking into its territory. The fence was proposed by Prime Minister Netanyahu and the Diplomatic-Security Cabinet gave it its backing on Monday. The date for the commencement of work has not been announced but funding has already been approved by cabinet ministers.

Commenting on the importance of constructing the fence, Netanyahu said “the decision is part of our national security and is an addition to the security fence we built along the border with Sinai, which has blocked entry to illegal aliens and, of course, the various terrorist organizations.”

The 30 kilometer fence is expected to run along the eastern side of the border with Jordan and will be erected between Eliat and the area designated for the new international airport in Timna.

Israel has assured Amman that the fence will not infringe on Jordanian sovereignty or understandings stemming from the peace agreement signed between the two countries in 1994.

The plan was designed in coordination with Jordan before being presented for approval to the Diplomatic-Security Cabinet and it will be built on the Israeli side of the border.

Netanyahu is hoping that the fence will be effective as that which was built along Israel’s border with Egypt’s Sinai Peninsula in curbing illegal migration and terrorist attacks. A similar fence was also built along the Golan Heights. Migrants have often passed through Sinai to reach Israel and tunnels have been used by Hamas to launch attacks in Israel.